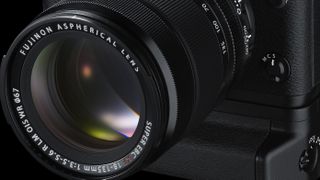 If you own the Fuji X-T1, the company's first weather and dust-proof X-series CSC, it could be about to get even better with the addition of Fuji's first weatherproof XF lens. The Fujinon XF18-135mm F3.5-5.6 R LM OIS WR will go on sale from July this year.

Thanks to the 1.5x focal length magnification factor of Fuji's X-series cameras, the 18-135mm optic has a focal length equivalence of 27-206mm, making it useful for a range of applications including landscape, portraiture and travel photography.

Fuji claims that the new lens has the most advanced stabilisation system available to date, with a 5EV level of correction according to the new, more stringent CIPA (Camera and Imaging Products Association) guidelines. That's the same as the difference between 1/500sec and 1/8sec.

Roll out the barrel

Inside the lens barrel there's a seven-rounded-bladed aperture and 16 elements in 12 groups with four aspherical elements and two ED (extra-low dispersion) lenses for better detail resolution, sharpness and contrast. Using the aspherical elements has also enabled the size of the lens to be kept down to 158mm at its longest extension. It weighs 490g and has a filter size of 67mm.

In addition, Fuji has applied its Multi-layer HT-EBC (High Transmittance Electron Beam Coating) throughout the lens to reduce flare and ghosting.

There's also a linear autofocus motor for fast internal focusing, which means the front element of the lens stays still during focusing - helpful when using graduated or polarising filters. The AF motor is also claimed to be silent and suitable for use when shooting movies.

As well as the 20 seals that keep out dust and water, Fuji has put a ventilator in the base of the lens barrel to keep dust away and ensure smooth zoom operation.

According to Fujfilm, the five-stop image stabilisation has been achieved by improving the lens's detection of low-frequency movement (the type associated with longer exposures) along with an algorithm to sense blur from the signal. Correction performance is reported to have been doubled in the low-speed shutter range.