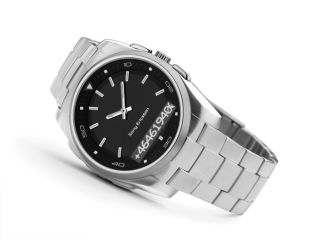 RIM is apparently planning a BlackBerry watch that syncs up with your handset via Bluetooth to deliver alerts and information (and the time).

The watch accessory was let slip by Antoine Boucher, VP of accessories, stating it was codenamed Alpha 1, and can show when you have an email, BB Message, Facebook and those old text messages.

But ever cooler than that - it will likely have an FM transmitter on board too, so streamed Bluetooth Music can be sent to the car or home stereo, making you into a really diluted version of Iron Man.

Admittedly, it's not the greatest rumour source, as it was posted on a forum from a conference a few months ago, so take it with a pinch of salt.

It makes sense as an accessory, as most BB users hate having to pull the phone in and out of a coat pocket (or even worse, holster.... yeesh), and simply glancing at the watch would be a much easier way of doing things.

Sony Ericsson has a similar range, with devices such as the MBW-150 offering similar functionality.

And of course don't forget the phone-watch wars between Samsung and LG - although we can never see talking to your wrist catching on.

No word on pricing or availability, but then again, we never really expected it.