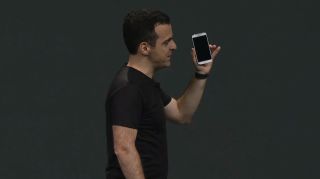 Google has taken its Nexus wand and waved it over Samsung's flagship phone, creating a stock Android 4.2 Galaxy S4 device it plans to sell unlocked for $649 on U.S. carriers T-Mobile and AT&T.

The question is: Will Google do the same to other Android devices?

One manufacturer has already answered the question for us.

"HTC is not currently planning a 'Nexus Edition' of the HTC One," Jeff Gordon, senior global online communications manager at the phone maker told TechRadar.

The Nexus 4-influenced Galaxy S4 was the lone hardware announcement to come out of this year's Google IO keynote, and it looks like it will be the lone phone to strip the manufacturer's skin in favor of Google's Nexus.

We can't imagine the S4 will be charting this territory alone for long, however, and will keep our ears open for phones that jump into the Nexus-ized S4's waters.

Check out the latest from Google's developer conference through our comprehensive hub page.

John McCann contributed to this report