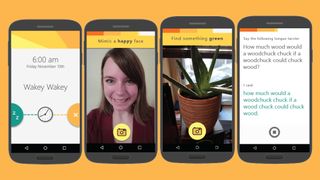 Microsoft has outed a new alarm app for Android, but it's not your everyday kind of mobile alarm clock.

Instead of just chiming out a tune at a set time to wake you up, Microsoft's Mimicker Alarm instead makes you play a game to keep you awake.

It still chimes away like regular alarms, but then you get a choice of three games - Color Capture, Express Yourself and Tongue Twister.

Color capture has you finding an object and taking a photo of it to match the color the app asks for, while Express Yourself asks you to take a photo of facial expressions, like a shocked face for example. The third game, Tongue Twister, requires you to repeat a tongue twister.

And, perfect for serial snoozers, if you don't play the game within 30 seconds of dismissing the alarm, it'll assume you've gone back to bed and chime again.

Microsoft says the app was developed through the company's Garage project, its experimental apps development arm.

Mimicker Alarm is also being used to show off the Microsoft Project Oxford's machine learning, which powers the app and focuses on emotion, computer vision and speech.

"Since we're open sourcing all of the code, we thought an alarm app would be easy for other developers to read the code and see how we used the APIs."

You can check Mimicker Alarm out in the video below.