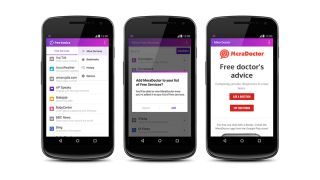 It won't be so easy for Mark Zuckerberg's internet to take over the world, after all.

Earlier today, the Telecom Regulatory Authority of India issued new rules which state, "No service provider shall offer or charge discriminatory tariffs for data services on the basis of content."

The rules shut out Facebook's Free Basics app, which delivers free access to a select number of websites, provided they meet certain requirements. Facebook's offering is now effectively banned in the second most populous country on the planet.

It's a decision that upholds the principle of net neutrality that everything on the internet stands on equal footing, and no service provider should favor some content over others.

Why the ban in the first place?

Free Basics delivers free access to Facebook along with Wikipedia, the BBC and sites for local news, health, education and business. While Facebook itself isn't banned in the country, today's decision is a major blow to the company's efforts to get people who don't have access to the internet otherwise online.

One could argue (and Facebook has) that its Free Basic sites provide a substantial benefit to users, but India's regulators issued the rules (which extend to other so-called zero-rated services), because they say that data providers shouldn't be able to pick which sites users have free access to, and which don't. It creates a competitive disadvantage, they argue, and the new rules are intended to curb this and uphold net neutrality.

Facebook maintains that the Free Basics app doesn't violate net neutrality because, technically, any service provider can join up, as noted by Re/code. However, there are hoops to jump through, and clearly, in its current form, some websites live behind a paywall while others don't.

Some have argued that Facebook doesn't need India in order to grow Free Basics and therefore the company's reach around the globe. Regardless, this is a significant bump in the road for Facebook, and a particularly pointed hit to Mark Zuckerberg, who personally carried the torch, so to speak, for Free Basics in India.

Zuck's not giving up yet

After Monday's decision, Zuckerberg took to – where else? – his Facebook page to comment on the decision and decree that this isn't the end of Facebook's efforts in the country.

"While we're disappointed with today's decision, I want to personally communicate that we are committed to keep working to break down barriers to connectivity in India and around the world," he continued. "Internet.org has many initiatives, and we will keep working until everyone has access to the internet."

According to Zuckerberg, Internet.org's programs have connected more than 19 million people in 38 countries. Zuck gave his guarantee that the company won't give up on connecting India, particularly since there are, according to him, over 1 billion people there who don't have internet access.

While Free Basics isn't the company's only means of delivering internet access, it arguably has the lowest barrier to entry, at least at the moment. All users need is a phone and the app, which doesn't charge for data used to browse Free Basics sites.

Time for Plan B?

Facebook isn't done with its efforts in India, though what it does next there, specifically, remains unclear. The staunch opposition on net neutrality grounds in a country of 1.252 billion (only behind China in population, where Facebook is banned outright), likely means Facebook needs to rejigger Free Basics if it wants the service available there.

While Zuckerberg has stated it's not sustainable to deliver the entire internet for free, it may need to rethink this policy - or find more partners - to get Free Basics to India and other other countries that have banned it (Egypt), or will once opposition becomes loud enough. After all, Free Basics was up and running in India months before critics and members of the public began to decry it and regulators eventually stepped in.

Will Facebook stick by its offering as-is, arguing that denying access to the internet, even a curated slice of it, is in fact a greater violation of people's rights? It's rallied around that point so far, and it doesn't make economic sense for Facebook to front the bill for free access to 100% of the internet.

The rules come under review in two years, so Facebook has plenty of time to tinker with its service if it wants to. Working more closely with regulators, Facebook could bring Free Basics back to India, just in a different form that better meets net neutrality standards.

We'll see what Facebook does next and where new opposition may arise. India isn't the first, and it likely won't be the last.