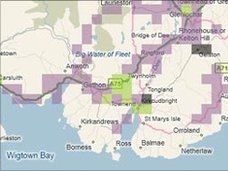 The results of the BBC's survey of 3G data across the UK are in, and the resulting map paints a patchy Pollock-esque picture for many of us.

44,600 volunteers took part in the survey, using an Android app to send around 1.7 million hours of data back to the testing firm Epitiro, covering 42 million locations across the British Isles.

The research shows that it's not just rural areas which often miss out on the higher speeds of 3G mobile data, with significant areas of towns and cities joining the roster of 'not spots' struggling by with 2G and lower.

Don't even get us started on 4G

The interactive map shows that the centre of London was well covered, showing that the epicentre of the capital enjoys robust 3G, but also revealing an impossible-to-ignore smattering of 2G coverage and even two black spots.

Head out into the West Country or any other less densely populated area of the country, however, and it becomes a predominantly 2G-covered affair with clusters of 3G only percolating around cities and suburbs.

Overall, the BBC reckons that we're getting 3G about 75 per cent of the time, but that 3G coverage in general is far patchier than mobile networks have led consumers to believe.

Although it's not perfect research with many areas not actually providing any results, it provides an interesting overview of the nation's mobile data.

Are you surprised to find that 3G isn't as prevalent as it should be? Let us know in the comments below!