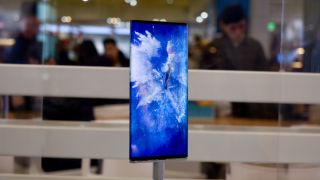 At a press briefing in Delhi last week, Xiaomi showcased what could be called a phone that defies normalcy — the Mi Mix Alpha. For those who don't know, it is the latest addition to Xiaomi's Mi Mix-series that's better known for bringing unique innovations in design and display. While the first Mi Mix brought in an extremely high screen-to-body ratio trend, the Alpha takes it to the next level.

The Mi Mix Alpha is a 5G concept phone, which Xiaomi says is their iteration of the flexible OLEDs and a "device straight out of a sci-fi movie." It comes with a huge 180.6% screen to body ratio as it wraps around the body from the front to the back. When it was first showcased, most of us dreamed of having a chance to play with it, and Xiaomi recently gave us a chance, not to play, but at least to take a proper look at the device.

Interestingly, Xiaomi also seemed willing to launch the Mi Mix Alpha in India. Sumit Sonal, Brand Lead for Mi, gave us an estimate that it will cost somewhere around 2.5 lakhs if it comes to India. Still, from what we understand, it is more about making a statement that Mi, as a standalone brand, is one of the leaders when it comes to innovation and premium products. More so, because Xiaomi's focus is now on building a separate space for Mi branded products in India this year.

As mentioned, we did not get to touch the Mi Mix Alpha because it's in the concept phase right now. So the most we could do is look at it from different angles while Xiaomi executives did the holding and touching for us.

Face to face with the Mi Mix Alpha

That unusual percentage is achieved by wrapping the screen around the whole body, leaving just a strip running down the length of the back, and housing the camera. So the front is a screen, the sides are screen, and yes, you guessed it, the back is also part of the screen.

The edges of the phone act as a status bar that shows the signal, battery level, network type, among other things. Since there's a screen all around, it has pressure-sensitive dynamic buttons on the sides for volume control instead of physical buttons.

Imagining an all-screen phone is not technologically challenging, but it takes many more innovations on the inside to make it commercially available. For example, housing sensors, speakers, a front camera without hampering the practical usability of the phone. To tackle these hurdles, Xiaomi has worked around by using the rear camera as a front camera, so when you flip the phone, you get a full view of the interface on the backside.

The phone also lacks speaker holes, and has 'Display Acoustic Technology' that uses piezoelectric speakers to produce sound, similar to what we have seen on Sony's TVs that use actuators to create sound using the display surface as the speaker.

It uses ultrasonic proximity sensors which uses ultrasonic sounds to detect object instead of infrared. There are LCP (Liquid Crystal Polymer) antennas housed on the horizontal strip that resides in the cameras. LCP is a more sought-after choice for the antenna's as it delivers a similar performance at varying temperatures with minimal loss.

The GPS and Wifi antennas are placed on the top corners, including others on the other two corners. It could be the reason Xiaomi had to go with a 2.05mm bezel on the top and bottom of the display.

There's a lot more modern tech built in the Mix Alpha, and that's undoubtedly one of the main reasons why it costs higher than most modern handsets.

When dealing with so much screen, one has to question its durability. The good thing is that the Mix Alpha doesn't bend or fold. Since you're not dealing with folds and hinges, the only concern remains around is its wreckage. Xiaomi says it has used a titanium alloy chassis and a ceramic back strip, which should make it a reliable phone, but if you drop it, the angles or height won't matter. You might end up dealing with severe damage to the phone and your pocket. A design which presumably also makes it far more fragile than most phones in the first place.

The camera setup is baked in a horizontal ceramic strip on the back housing a whopping 108MP camera, with OIS (optical image stabilization), a large 1/1.33-inch sensor combining pixels into 2x2 squares to deliver 27MP images and better low light performance. Unlike the screen – which honestly isn't what we need right now – this camera sounds very promising.

It also has a 20MP wide-angle lens that can also take macros up to 1.5cm and a 12MP telephoto lens. We are curious to see how the camera turns out because it seems incredibly tempting on paper.

The Mix Alpha's design calls for so much attention that it makes the other aspects of the phone look boring. Besides the unusual design, it also packs the Snapdragon 855 Plus chipset with 12GB of RAM and 512GB storage. It also packs a nano silicon cathode 4050mAh battery with 40W fast charging and 5G support. It doesn't support wireless charging, neither the 4050 seems enough to power up that large display and demanding hardware for very long. However, it is something we are really looking forward to seeing.

Xiaomi says it's a concept for a reason

Xiaomi thankfully doesn't put this as a mainstream device, as it's being described as a 'concept smartphone' that will only be produced on a small scale for now. It does look like a future phone, but it also raises tons of questions when it comes to investing around Rs 2.5 lakh.

Like any concept product, it would be unfair to judge it on the usability factor against its high price. The biggest question is, why do we need a wrap-around display? The company hasn't yet figured out a convincingly useful benefit of that additional display real estate. From what we got to hear from Xiaomi-

What's promising about the Mi Mix Alpha as a concept is the intelligent use of AI algorithms paired with tons of sensors. Xiaomi says the Mix Alpha learns and adapts user patterns and use cases to customize the experience as per the user. These are some of the scenarios-

While Xiaomi makes big claims about the Mi Mix Alpha being a "supremely intelligent" phone, we would still reserve our comment on how well it will fare when used in real life. We can only hope the company gives us a reason big enough to justify the existence of that extra screen space.

At this moment, it is only for those who really want a taste of the future, and own a rare piece of innovation. It will undoubtedly be crazy expensive if Xiaomi decides to bring it to India as it is more suitable for collectors and tech enthusiasts.