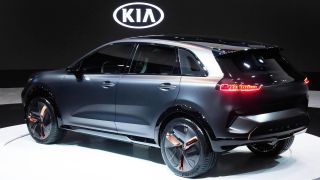 Kia has rolled into CES 2018 to unveil a new all-electric concept car. Called the Kia Niro EV, this compact SUV is all about what Kia's future, and how it's getting there.

The car also features an Active Pedestrian Warning System (APWS) that relies on front-view cameras, object recognition and front speakers. It will issue an alert if it detects a pedestrian or cyclist come in front of the car. Because the car's powertrain is silent, APWS is a potentially important safety feature.

The Niro EV is seemingly designed to show what's possible in Kia's electric future, so don't expect the car as shown to make it to market. Instead, the tech will likely find its way in some form or another to Kia cars over the next few years.

In addition to the Niro EV, Kia is also showcasing a number of advanced car technologies at CES, including what it claims is the first in-car 5G connection. However, Samsung earlier in the day made claims it will be the first to 5G-ready tech in the car thanks to a partnership with Harman, so we'll have to see who wins that race.

No matter who you're rooting for, 5G networks are coming to the US in the next few years, so it makes sense for Kia (and Samsung) to get on the bandwagon early.

Beyond the 5G conversation, Kia plans to have every single one of its vehicles be a connected car by 2030.

On the self-driving front, Kia announced plans to begin Smart City autonomous vehicle testing in 2021. This is to begin the process of commercializing Level 4 autonomous driving, aka make it an everyday consumer experience.

Kia announced that it will unveil 16 new advanced powertrain cars by 2025. This group will count a new family of hybrids, plug-in hybrids and EVs, plus an all-new fuel-cell EV in two years' time.

Last but not least, Kia is bringing its WiBLE car-sharing service to new destinations this year. Europe is the first stop for the app-based car reservation system, which has already launched in Korea. This will be followed by other regions in the coming years.

With competitors like Nissan demonstrating 'brain-to-vehicle' communication at CES, Kia is clearly bringing its own cutting-edge tech to the popular Las Vegas show. While it may be some time before we have these technologies in our cars, it's still exciting to see where vehicles are headed.