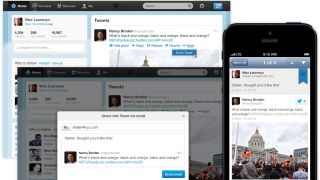 And once again, the engineers working on that project have (we imagine) sighed, rolled their eyes and shrugged at one another, privately expressing a wish that certain CEOs would stop making them look bad by promising the moon on a stick, which tech teams are unlikely to be able to deliver (we imagine).

Speaking at the University of Michigan, Costolo told students, "By the end of the year - I've already promised this so the engineers, when I promised it publicly, they're already mad at me so they can keep being mad at me.

"Now, again, once again, I caveat this with the engineers who are actually doing the work don't necessarily agree that they'll be done by the end of the year, but we'll just keep having that argument and we'll see where we end up year-end."

Glad we cleared that up then, Dick. Thanks for that. So it doesn't look hugely likely that the archive backup service will hit the web before Jan 1, but who knows what red hot pokers, carrots on sticks and cats o' nine tails Twitter uses to eke code out of its engineers.

It's not like you can just flick a switch for this stuff though – and there's a vast number of tweets to consider here: Costolo let slip that Twitter is now allowing over 500 million users to send more than 350 million tweets every day.

Brevity is still its friend though: the CEO told Univeristy of Michigan attendees that Twitter will "never change" its 140-character limit.