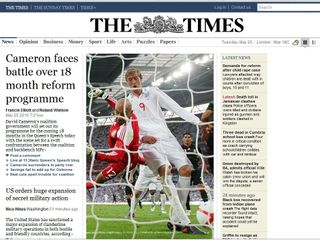 Charge of the Times brigade

Rupert Murdoch has been speaking/boasting about News Corp's Times paywall experiment, explaining that it looks like the site is going to be a success.

Although he doesn't mention subscriber numbers, speaking to newspaper The Australian, he notes that they have managed to lock in a number of people to the site.

"We are rolling out a paid content strategy across our newspaper websites," Murdoch explains.

"Already The Wall Street Journal is the largest of its kind in the world with 1.1 million paying subscribers online.

"The Times of London and The Sunday Times last month started charging for access to their websites.

"It's going to be a success. Subscriber levels are strong."

Not one to blow his own trumpet, Murdoch believes that News Corp's subscription models are a turning point for the way money is made on the web," explaining: "We are witnessing the start of a new business model for the internet.

"The argument that information wants to be free is only said by those who want it for free."

It sounds like fighting talk, but we pat him on the back until official figures are released.