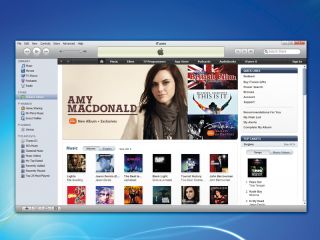 The king of music downloading doesn't offer a streaming service

Few industries appeared as badly prepared for the digital age as the music business.

The major record labels were caught flat-footed by the file-sharing revolution and failed to come up with a compelling enough paid-for version to prevent listeners downloading for free.

But there are signs of an end to lawsuit threats.

The reason is simple: the legal side of internet music is becoming increasingly appealing.

Streaming services such as Spotify – which exploded onto the scene last year – are making their mark on the mainstream. It's a fascinating shift.

For years, the emphasis in online music has been on owning tracks, much as you do when you buy a CD. But in a world where you're connected to the internet 24 hours a day, having the same track stored on your MP3 player, laptop and PC is outdated: who cares where the music is stored as long as you can play it whenever you want? That's the Spotify genie, and it's not going back in the bottle.

There are several paid-for models around. Some just offer streaming, while others give you the ability to own your music outright, and still more offer a combination of these services. Either way, it's pleasing to see DRM (Digital Rights Management) being shown the door.

Until recently, most music download services would lock the files you bought, preventing you from playing them on more than a few computers or compatible MP3 players. Some more restrictive services would prevent you burning the music you'd bought to a CD.

Pirates found a way around such restrictions, with the only people truly blocked from the music being the legitimate purchasers who just wanted to share the sound with a few friends, or – horrors! – burn it to disc for listening in the car.

DRM was unpopular with users, who felt they should be able to treat their downloads as they treated their CD collection. This is why it's refreshing to see that all of the services we reviewed here allow you to download music without DRM. That means you can play them on every MP3 player on the market, burn them to a CD or put them on as many computers as you like without problems.

The first thing to identify when subscribing to a music service is how and where you listen to your tunes. Services such as eMusic, Sky Songs and Napster give you a certain number of downloads per month with your subscription fee.

Once downloaded, you don't need a connection in order to play these tracks. But if you're connected all the time, music streaming is equally tempting. Of the four services we've reviewed here, only eMusic doesn't allow you to stream music; the others offer an unlimited amount of streaming. That means you can listen to a vast range of music without it eating into your download allowance or costing you money on top of your subscription fee.

If you spend your day in front of a computer with an internet connection, a service with a good streaming option could trump one that allows you to download and keep a relatively paltry number of tracks per month.

Spotify is a fascinating blend of the styles. It started as a streaming-only service, but if you happen to be a premium member with a supported device, you can listen to music on the go as long as you have a decent 3G connection. You can also sync your playlists to your phone in order to use the offline mode.

It's an incredible option, as it means you're not limited to five or so MP3 downloads. Instead, you can download any of Spotify's six million tracks to your phone and listen to them irrespective of whether you have an internet connection. If you don't want to actually subscribe, you can still buy tracks individually.

You should also pay attention to the way your chosen service allows you to listen to music. Some, such as Spotify and Napster, allow you to download an application to your PC and then download or stream music from there. That's useful if you're always at the same PC, or if your employer allows you to install your own applications on your work PC.

The other option is to stream music through your browser. This has advantages: you can play your music on any PC without needing to install the application – but is usually a clunkier process, at least for the moment anyway.

Finally, you need to think about the kind of music you listen to. Three of this month's services – Napster, Sky Songs and Spotify – have deals with the big labels, so you'll be able to find virtually any track, including newly released material from the biggest artists.

By contrast, eMusic places a premium on undiscovered music, offering tracks from lesser-known artists. This is a real boon for fans of indie music, but households with broad musical tastes should perhaps consider opting for a more mainstream offering.