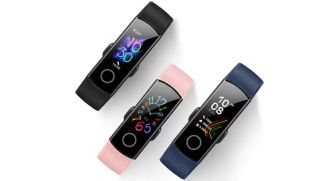 Last month, Honor unveiled the Honor Band 5 fitness tracker alongside the Honor 9X in China. It will be announced in India tomorrow (August 8) and will be available via Flipkart.

The Honor Band 5 is a budget fitness tracker with a minimalistic design, an OLED display and comes in colours such as Meteorite Black, Midnight Blue and Coral Pink. The display is a 0.95-inch colour panel at a resolution of 240 x 120 and is covered by a 2.5D curved glass and supports touch input. The display can be adorned with various watch faces and has a physical home button below it.

The tracker is water-resistant up to 50 metres, so water or sweat should not pose any problems to your Honor Band 5 during more intense activities. It’s also dust-resistant. The battery is rated at 100 mAh and is estimated to have a battery life of 14 days. Along with extensive fitness tracking, it can also be used to answer calls and attend messages and notifications. The watch weighs only about 22 grams.

The most unique feature is the blood oxygen level sensor via pulse oximetry and indicates the level of SpO2 or oxygen saturation in the blood. Not just that, the Honor Band 5 also has a PPG heart rate sensor for continuous pulse tracking.

It will be launching via Flipkart and is expected to be priced around INR 3,000. At that price, it will head-to-head with the Xiaomi Mi Band 4 which is another similar fitness tracker.

Honor executives have also confirmed that the Honor 9X series will be coming to India in the coming months, which is its latest mid-range smartphone powered by the all-new Kirin 810 chipset and triple cameras.