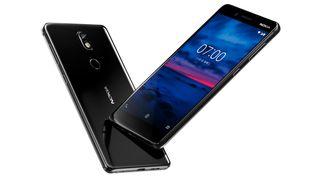 HMD Global is planning to launch a new Nokia handset in the Indian market. The company has started sending out invites mentioning the day, date, time and venue of the event. The invite says- “HMD Global invites you to n exclusive gathering to unveil the next milestone for Nokia phones”. However, it has given no clue about the upcoming device.

The global launch of the Nokia 7 recently hints that it could be the same phone launching on Oct 31. If the expected turns out to be true, it will be the fifth smartphone from the company to be launched in India.

On the specification front, the Nokia 7 comes with a 5.2-inch full HD display encased in a glass body and Corning Gorilla Glass 3 on the top. It is powered by Qualcomm Snapdragon 630 processor coupled with 4GB or 6GB RAM along with 64GB internal storage which is expandable up to 256GB via microSD card. It runs on Android 7.1.1 Nougat out of the box, which the company says, will be upgraded to Android 8.0 Oreo. It also has a fingerprint sensor at the back.

In terms of optics, the phone has a 16-megapixel rear camera with dual-tone LED flash and a 5-megapixel front shutter with 84 degrees angle of view. Just like Nokia 8, the phone also has a Bothie feature which allows users to take pictures with both the front and rear cameras simultaneously. The phone gets its daily fuel from a 3,000 mAh battery and has fast charging feature. For connectivity, the handset has Wi-Fi, Bluetooth 5.0, GPS, NFC and USB Type-C port.

Apart from Nokia 7, some tech experts are also expecting the rumoured Nokia 2 to come to India. Recently, we have informed you about the leaked Nokia smartphone which has been dubbed as Nokia 2. The phone is expected to come without a fingerprint sensor with an approximate price tag of Rs 6,400.

To recall, HMD Global made a comeback with the iconic dumb phone Nokia 3310 followed by Nokia 3, 5 and 6. Apart from these, the company also launched Nokia 8 last month.