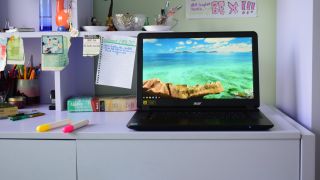 Is this Chromebook watching your kids?

Google has promised it's not doing anything untoward in its tracking of schoolchildren and students working on its Chromebook line of hardware.

The cheap, slimmed-down laptops have been a big hit in educational institutions, but there are claims that Google is harvesting more data from its Google for Education initiatives than it really should.

At the forefront of the finger-pointing is the Electronic Frontier Foundation (EFF), which filed a complaint with the US Federal Trade Commission earlier this week alleging that Google was collecting and sharing personal student data in violation of its own guidelines.

"We are confident that our tools comply with both the law and our promises," wrote Google's Jonathan Rochelle, "including the Student Privacy Pledge, which we signed earlier this year." Google's backers have said the EFF is misunderstanding the pledge and the way Google is going about its data collecting.

Tracked for the future

The EFF, however, is sticking to its guns. It says Google is building up "behavioural profiles" on students even when they're working outside the Google Apps for Education services – those outside services include the likes of Google Maps and YouTube.

Google says students' personal data is not used to serve ads on these non-educational sites, whereas the EFF thinks it very probably is – and now the FTC will have to decide exactly who is telling the truth. Chrome's tool for syncing data between machines is also attracting criticism.

Parents are also becoming uneasy about exactly what Google knows about their kids: a father from California has recently been fighting for the right for his daughter to use a laptop of his choice rather than the Chromebooks issued by her school.