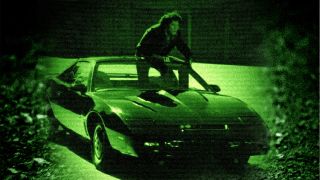 A breakthrough developed by researchers at the Massachusetts Institute of Technology may just be able to shrink down night vision technology to the point that it could wind up in your car windshield or smartphone.

Thermal imaging, capable of illuminating subjects in utter darkness, has normally been restrained by the need for bulky and expensive cooling equipment to regulate the temperature-sensitive technology. However, MIT's new chip could forgo all that in place of a system of miniaturized sensors.

The foundation of this new system is graphene, a super-strong, semi-conductive material that's reactive to heat. It can be used to create computer chips capable of sensing heat and humidity, which in turn could revolutionize thermal imaging, as well as any other infrared technologies.

"Graphene is not only great for transistors, [but also] reinforcing structural materials," said Tomás Palacios, electrical engineer and co-author of the study behind the new sensor. "It's also one of the very best materials we know for infrared detection."

According to a report in Scientific American, the microscopic chip is cooled by an air pocket around a graphene strip, making it flexible, low-cost, and capable of detecting heat without the need for an external cooling system. Once further developed, graphene sensors could greatly reduce the cost and size of thermal imaging, improving its applications in the consumer, military and emergency response sector.

While other forms of night vision technology exist without a need for external cooling, alternatives such as low-light image sensors require at least some light to function properly. Coolant-dependent thermal imaging systems can show a clear image in absolute darkness, and while some models don't require refrigerants, the heat given off by an uncooled system can interfere with the thermal sensor's picture.

Graphene's possible applications don't stop at sensing heat. The stronger-than-steel material's ability to "retract" when exposed to light, as seen below, has spurred research on graphene's potential in robotics, where it could be developed into a possible inorganic muscle of sorts.