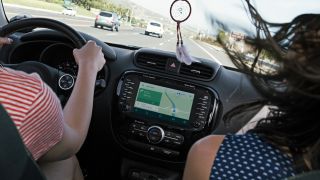 Android Auto could have more than one rival to deal with.

Pick up an Android phone today, and as well as the stock Nexus experience you've also got reskinned versions from Sony, HTC, LG and Samsung to consider. Well, you soon might have to make the same decision in your car.

A post on the Android subreddit says that HTC is working on its own version of Android Auto called Cello. Apparently it goes further than Google's own software, offering tighter integration with the mechanics of the car and monitoring variables such as tyre pressure.

It's a fairly unsubstantiated rumour right now but it's an interesting idea: could HTC and the other smartphone makers port their Sense and TouchWiz UIs over to car dashboards?

KitKat in your car

Google isn't going to let its hardware manufacturers alter the look of Android Auto (as they can with Android on smartphones) so it would be down to HTC to come up with an entire package of its own. Some hardware makers are already supporting multiple platforms in the same unit.

The Reddit insider says HTC Cello is based around Android 4.4 KitKat and is running software called Sense Automotive. Night vision, sonar, DVD, tyre pressure, lane departure warning, navigation and GPS systems are all integrated, and the unit has apparently been in testing since late 2014.

It sounds like the system is a long way from reaching the production stage but consider this as fair warning that the market might get even more crowded than we expect - it might not just be Android Auto and Apple CarPlay you're choosing between for your next motor. Let's hope the software updates arrive a little bit faster, though.