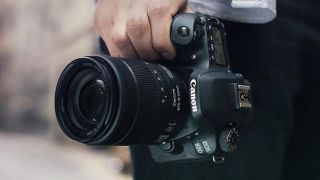 Rumors of a 32.5MP APS-C sensor inside the successor to the EOS 80D have been with us since registration details from Canon and rumored specs emerged earlier in the year, while reports of 10fps burst shooting, 4K video with no crop, dual card slots and Bluetooth and Wi-Fi emerged later on.

Now, further rumors of the camera's sensor having phase-detect AF coverage across the whole frame, together with clean HDMI out and eye detection in both stills and videos, have emerged on Canon Watch. Eye AF during video recording was a highlight of the recent Sony A7R IV.

Talk of a 31.2MP APS-C sensor, rather than the previously mentioned 32.5MP one, might be explained simply by a difference between total and effective megapixels; a camera with a 32.5MP sensor may well have an effective pixel count of 31.2MP.

The most curious rumor, however, is the idea that Canon will create a mirrorless body that will maintain the EF mount common to its existing EOS DSLRs, rather than opt for either the RF or EOS M mounts from its mirrorless lines.

The idea of an enthusiast camera that somehow straddles the technologies on both systems would make some sense, although physical or technical challenges may limit the extent to which this is possible.

Quite how the company plays its DSLR hand now that it has two mirrorless lines to develop is unclear.

Canon has pledged to continue support for the EOS M line, although it hasn't updated its EOS M range for almost a year and a half. With its almost three-year-old EOS M5 still the flagship model, and the likes of the more recent Fujifilm X-T30 and Sony A6400 raising the bar for this sector of the market, a new enthusiast option is sorely needed to maintain the system's appeal.

It seems unlikely, however, that Canon will simply cease developing its DSLR line, as has been speculated. It recently launched the EOS Rebel SL3 / EOS 250D, and is expected to launch a successor to the EOS-1D X Mark II in time for the Summer Olympic Games in Tokyo next year.

A release date for the EOS 90D has been mooted for August, which is plausible. August has traditionally been a month in which manufacturers introduce new models just ahead of the Photokina show in Germany, although this year's event, which was scheduled for May, was cancelled earlier this year.

None of this has been confirmed by Canon yet, but with enthusiast DSLR and EOS M mirrorless options not updated for some time now, it seems highly unlikely the year will end without at least an addition to either line.