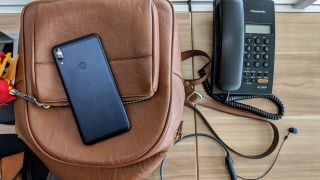 Its been a while, but the Taiwanese tech giant Asus is back in action. The company has launched a new aggressively-priced smartphone named Zenfone Max Pro M1 in India on Monday.

The key highlight of the phone is its mammoth-sized 5000mAh battery, latest hardware and affordable price.

For optics, it has a dual camera setup with a 13MP primary, and a 5MP secondary sensor on the back. At the front, the phone has an 8MP camera with LED for selfies and video calls.

The Asus Zenfone Max Pro M1 has a Qualcomm Snapdragon 636 SoC running at its heart with Adreno 509 for graphics. It has the same hardware as the Redmi Note 5 Pro, and the 3GB RAM variant is now the cheapest smartphone to have a SD 636 SoC.

The biggest change here is the software, as it’s the first Asus phone to ship with stock Android 8.1. The company, in the past, had rolled out phones only with its heavily customised ZenUI on top of Android.

The phone will be available in two colours — Midnight Black and Grey. It will be available exclusively on Flipkart starting 3 May. The company has also showcased a third variant of the phone with 6GB RAM and 64GB storage with a 16MP+5MP primary camera and 16MP front sensor for Rs 14,999. It will be a direct competitor to the Redmi Note 5 Pro 6GB variant.

In a market dominated by Xiaomi phones, the Zenfone Max Pro M1 has all the elements to give Redmi Note 5 Pro a run for its money. The 3GB RAM variant at Rs 10,999 is the only phone to have a composition of huge battery, clean software and a powerful chipset.

At this price, it competes against the Redmi Note 5, which ships with a two-year-old Snapdragon 625, customised software and a single camera. On papers, the Zenfone Max Pro M1 looks much stronger.

Also, the Rs 12,999 variant stands firmly against the Redmi Note 5 Pro 4GB variant on paper, that too at a lesser price. Both the phones offer similar specifications and features, so it all comes down to real life performance.

We will be comparing the Zenfone Max Pro M1 with its competitors very soon. Make sure you visit us again to check our in-depth analysis.

Launch offers include additional 10GB data for a year on Rs 199 and above for Vodafone customers. A no-cost EMI offer on the Zenfone Max Pro M1 and Rs 1,000 off when you exchange an old device.

Starting with the Zenfone Max Pro M1, Flipkart will offer its new mobile protection plan for smartphones which covers broken screens, liquid damage, hardware and software issues, and more for an introductory price of Rs 49.