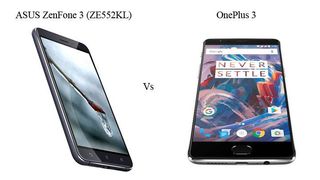 With the ZenFone 3 (ZE552KL) recently breaking cover in the market, we were surprised by the similarities between itself and the OnePlus 3. It's clear that ASUS wants to take on the OnePlus offering head-on in the Indian mobile space. But can it step up to the OnePlus 3 in terms of hardware? Let's have a look.

When we're talking about two evenly matched devices, sometimes one or two features can make the difference. Given that both the phones have identical set of cameras, display size (different quality) and the price tag, it can get quite difficult to list out the key features. But if we were to pick one, it would be the presence of 6GB of RAM on the OnePlus 3, while the ZenFone 3 maxes out at 4GB. However, the ZenFone 3 makes up for it with its superior design and the presence of more colors compared to the OnePlus 3.

Both devices come with attractive 5.5-inch Full HD (1920x1080) display panels, but the OnePlus 3 has the upper hand here thanks to the Optic AMOLED panel used by the company.

The ZenFone 3, on the other hand, comes with the Super IPS+ LCD panel, which is good in its own right, but not capable of stepping up to the Optic AMOLED panel of the OnePlus 3.

This might be a subjective thing for many and we don't think the customers will notice the difference in performance between the two phones. However, for the sake of the comparison, we would like to mention that the OnePlus 3 has the advantage with its quad-core Snapdragon 820 processor while the ZenFone 3 is using the octa-core Snapdragon 625 chipset (2.0 GHz Cortex-A53 cores).

It's almost uncanny how identical the hardware on the two phones are. The OnePlus 3 and the ZenFone 3 are packing 16MP rear cameras with optical image stabilization, ensuring great photos from the rear camera. On the front, you will find an 8MP camera on the OnePlus 3 and the ZenFone 3 respectively. Given that we're yet to compare the real world camera performances of the two devices, we can call this a tie for now.

The two devices come with 3,000mAh batteries underneath, so there might not be much of a difference in this area (at least on paper). However, the standby times will be dependent on the kind of software optimization done by the manufacturers. Given that the OnePlus 3 is using the power hungry Snapdragon 820 SoC, we believe the ZenFone 3 might have a small advantage here.

Both phones are packing a fingerprint scanner and the reversible USB Type-C port.