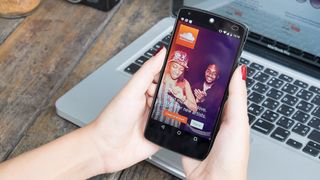 SoundCloud is one of the world’s largest and most popular music streaming platforms. It connects musicians and listeners from across the world, allowing people to stream many of their favorite artists for free.

However, one of the main drawbacks of SoundCloud is that it doesn’t always allow you to download music through its native interface. This problem can be overcome by using any one of a wide range of SoundCloud music downloaders, which come in desktop, mobile app, and web app form.

Unfortunately, the huge selection of free SoundCloud downloading programs out there can make it difficult to choose a reliable one. In fact, we’ve found the sheer number of choices quite overwhelming at times.

Because of this, we decided to outline our top five free SoundCloud downloaders. On this list, you will find a range of different options, and we’re confident you will discover one that meets your needs.

Prefer to get your tunes elsewhere? We've also rounded up the best free YouTube to MP3 converters for your listening pleasure.

Bear in mind that artists depend on people paying to purchase or stream their songs. You should only download tracks if you have permission to do so.

KlickAud is an extremely simple, beginner-friendly web-based SoundCloud downloader. Basically, it works by allowing you to enter a song or playlist URL that you want to convert to MP3. Once you hit the download button, your music will be converted and downloaded directly to your computer’s downloads folder.

For us, the best thing about KlickAud is its simple, fast download process. We tested it out with a few different songs, and to say we were impressed with its speed would be an understatement. The entire download process took all of a few seconds.

It’s worth noting that although KlickAud can be used via your Android device’s web browser, it won’t work with mobile iOS devices. Users have also reported problems with browsers other than Google Chrome or Mozilla Firefox.

Like KlickAud, SoundCloud to Mp3.App is a powerful SoundCloud music downloader that allows users to download their favorite songs in MP3 format. It came in at second place on our list, but it could easily have made the number one position.

Similarly to most other free, browser-based SoundCloud downloaders, SoundCloud to Mp3.App takes the URL of a song or playlist as input and downloads MP3 files directly to your computer.

We did notice that this platform comes with quite invasive advertising, but overall we were impressed with its rapid, reliable service. Additionally, it works on both Android and iOS devices.

ScloudDownloader is yet another browser-based free SoundCloud music downloader. Like the first two options on this list, it offers fast downloads for all your favorite SoundCloud tracks.

ScloudDownloader readily admits that up to 5% of files can’t be downloaded through its interface, which means that you could run into problems. However, we didn’t have any issues when we tested it out.

One thing that did stand out to us was that ScloudDownloader allows you to download MP3 tracks in both 128Kbps and 320Kbps formats. This is useful if you’re looking to save space by using a lower-quality audio file.

However, you will have to use a separate playlist downloader if you want to save more than one SoundCloud file at a time.

SingleMango offers one of the tidiest SoundCloud music downloading interfaces we’ve seen. The only reason it didn’t come in higher on this list is its slow, sometimes laggy performance.

However, we were still impressed with its service. Once again, SingleMango is a browser-based free SoundCloud music downloader which facilitates simple, fast downloads. All you need to do is paste the URL of the song you want and hit the download button.

Your chosen music will be saved as an MP3 file. SingleMango supports all browsers and Android devices, but it won’t work with iOS systems. It also comes with useful Chrome and Firefox extensions that allow you to quickly download songs on the go.

The final free SoundCloud downloader on our list is ForHub.IO. Like SingleMango, this downloader would have featured higher on our list if it wasn’t for its slow, laggy performance. However, it still worked well, even if it took a little longer for downloads to finish.

One thing that stood out for us was the fact that ForHub offers an iOS SoundCloud downloader app. This app allows you to rapidly save SoundCloud songs to your iPhone, iPad, or other iOS device.

In addition, ForHub is available in a range of different languages. And, it even comes with a video tutorial to guide you if you have problems—although we can’t imagine why you would.