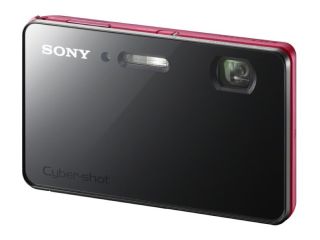 Slim, smart and watertight, is the TX200V the perfect combo?

Sony has announced three new compact cameras, including the slim Cyber-shot DSC-TX200V which has an 18.2MP sensor and is waterproof down to 5m.

The flagship pocket-papper is a svelte, glass-fronted camera with a Carl Zeiss 5x optical zoom lens. What's most impressive is that this highly covetable camera is also waterproof down to 5m for a spot of impromptu snorkelling.

Its 18MP CMOS sensor is backed up by an improved focussing system that Sony claims will get pin sharp results, even in low light, in just 0.25 seconds.

On the back is a 3.3-inch Xtra Fine Tru-Black OLED touchscreen. All that, and 1080p video recording is thrown in too.

Snappers for a snip

Both feature a 16.2MP sensor and 5x optical zoom, the WX70 has a 3-inch touchscreen while the WX50 has a 2.7-inch screen with button controls.

All three cameras use image stabilisation tech borrowed from Sony's Handycam camcorder range. The "Optical Steady Shot Active Mode" promises to cut out the blur in photos as well as video.

The WX50 and WX70 have been confirmed for a European release in March, while we await news of a release for the impressive TX200V.