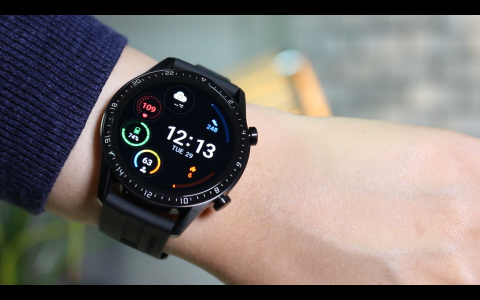 The Huawei Watch GT 2 has excellent battery life coupled with health and wellness tracking features, but the software needs improvements in order to stand out from the competition.

The original Huawei Watch GT stood out largely thanks to an attractive design and a long-lasting battery, and now the brand is back with the Huawei Watch GT 2, a wearable that thankfully doesn't abandon those features.

It is - as you'd hope - also an improvement in a number of ways. Huawei is making a strong push into the smartwatch market, and it’s evident from the Watch GT 2 that it has put a lot of thought into the second generation. Having said that, the focus has been more on refinement than delivering a totally overhauled experience.

We got the 46mm Sport edition in black for review, and it’s difficult to visually differentiate between this and the original Watch GT. However, once you’ve gotten it up and running, there’s plenty here that makes it stand out.

If you want a 'classic' leather strap rather than a sports strap it rises to £219 / AU$428 / AED949 (roughly $280) for a 46mm model, with the 42mm version of this seemingly not being widely available. Like most Huawei products, the Watch GT 2 is not available in the US.

The Huawei Watch GT 2 is lightweight and at 10.7mm thick it doesn’t feel chunky on the wrist. The 46mm watch has a 1.39-inch AMOLED screen with a resolution of 454 x 454 pixels and a brightness of 1,000 nits, which makes it decently bright and sharp.

It weighs 41g without the black silicone strap, which makes it lighter than the previous model.

For both models, Huawei has adopted a 3D glass screen to create a bezel-less design, with curved edges which merge into the casing. It's an attractive design, if similar to the original Huawei Watch GT.

The watch is also 5ATM rated, which means it can survive at depths of 50 meters underwater for up to 30 minutes.

There are two buttons on the right side of the watch. One is to select built-in apps, while the other is for health tracking and launching workouts. Swiping down from the home screen reveals quick settings such as do not disturb, find my phone, and alarms, while swiping up shows your recent notifications.

There’s a mono speaker on the right edge, which is quite loud when taking calls and listening to music, but really you should still just stick to using a headset.

There's also a microphone on the left edge, which works well even in a crowded space.

Finally, the Huawei Watch GT 2 has a lot of sensors for detection and tracking, such as a gyroscope, accelerometer, optical heart rate, ambient light and air pressure - this is mostly fairly standard smartwatch stuff though.

The Watch GT 2 is powered by Huawei’s home-grown Kirin A1 chipset, which includes intelligent power-saving technology. It has 2GB of RAM and 4GB of storage, out of which 2.2GB is usable space - enough to hold around 500 songs.

In terms of connectivity options, the Huawei Watch GT 2 offers Bluetooth 5.1 as well built-in GPS (along with Glonass and Galileo for more accurate, faster and precise positioning).

There’s sadly no NFC support though, so you can’t make payments using the watch. There’s also no Wi-Fi or LTE here, so you’ll have to always keep the watch paired with your phone to keep things up to date.

You get Huawei’s own Lite OS here, which feels good to use for the most part, despite not offering as many features as the likes of Apple’s watchOS, Google’s Wear OS, Fitbit OS, and Samsung’s Tizen. It can also sometime feel a bit sluggish.

Since Huawei's platform doesn’t have an app store, there’s no support for third-party apps. You also can't add widgets or customize the watch in any significant way, which makes the Watch GT 2 feel less like a smartwatch and more like a digital watch with GPS and fitness tracking.

For the most part all you can do is cycle between a watch face, heart rate monitor, stress levels, the temperature, music, and fitness tools.

Though you can share data with Google Fit and MyFitnessPal directly from the watch, the Watch GT 2 is at its best when using the Huawei Health app.

This app is organized around four tabs - the home screen shows the daily health readings, the second tab shows various exercise modes, the third tab is for connecting other Huawei-supported devices, and the fourth tab is for settings, personal achievements, your profile, and weekly and monthly health and fitness reports.

It's fairly straightforward to use, with options to drill down and look at things in greater depth if you so desire.

The Huawei Watch GT 2 supports smartphones running Android 4.4 or higher and iOS 9.0 or higher, so it's likely to work with your handset - we used it exclusively with the Huawei Nova 5T.