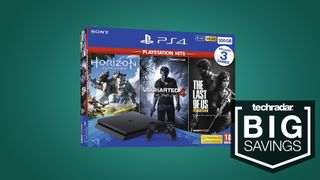 Missed out on the great PS4 and PS4 Pro bundle deals over Black Friday and Cyber Monday? Don't fret, as you can still get your hands on a bunch of PlayStation 4 bundles for the same price as we saw during that period – and some are even cheaper than they were.

That means you can pick up a PS4 with Call of Duty: Modern Warfare for just £199, or a PS4 with FIFA 20 and a second DualShock 4 Controller for just £219. (Not in the UK? Scroll down for the best PS4 prices where you are.)

These bundles could make a great last-minute Christmas present for a loved one, or even for yourself. Check them out below:

Sony PS4 500GB Call of Duty: Modern Warfare Bundle | £199 at Amazon
Amazon is offering the regular PS4 with the recently released Modern Warfare for £100 off. This is the same price as we saw during Black Friday weekend, and a great bargain.View Deal

PS4 White Pro Console with Marvel's Spider-Man | £269.99 at Very
Prefer a white PS4 Pro? Then you'll want to check out this bundle from Very, which includes the PS4 Pro and Spider-Man for less than £300. You can also add optional extras.View Deal

PS4 Pro | Death Stranding | Now TV pass | £269 at Game
This PS4 Pro bundle has just come down in price massively, and it has a brand-new game too. It also comes with a two-month pass for Now TV's entertainment channels, which is worth around £18.
View Deal

Sony PS4 500GB Console & FIFA 20 Bundle: £199.99 at Argos
Argos has knocked £50 off this bundle, which means you're essentially getting the newly released FIFA20 for free. You get the console in a Jet Black color scheme and a matching controller, the game on Blu-ray, FIFA Ultimate Team Bonus Content, and a free 14-day trial of PlayStation Plus.
View Deal

Sony PS4 bundle | 500GB | Free Game | Blu-ray | DualShock Controller: £219.99 at Argos
This Argos bundle really delivers the goods. For £219 you get a 500GB PS4 console with a DualShock 4 controller and a choice of both a free Blu-ray movie and an AAA PS4 game, with Marvel's Spider-Man and Death Stranding among the games on offer.View Deal

If you're not in the UK, these are the best PlayStation 4 prices in your region: