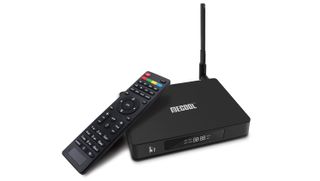 At just under $104 at Aliexpress, the Mecool K7 Android thin client is expensive for what it offers, component wise, but it has a feature not found amongst most Android boxes: a triple DVB-C, DVB-S2 and DVB-T2 TV tuner.

There are cheaper models available on the market, but none of them combine Android 9.0, 4GB DDR4 RAM and 64GB onboard storage.

What’s more, it offers a nice LED display at the front, an optical connector, 802.11ac (with two antennas) and a Gigabit Ethernet port.

A personal computer that is completely silent, can sit snuggly below your TV or monitor and provide you with the latest entertainment. That is exactly what the Mecool K7 is promising, even if it doesn't quite hit the mark. It is a bit more expensive than similarly configured Android boxes, but the tuners are an absolute godsend for those who know how to use them.

The Amlogic S905X2 CPU that powers the K7 should be speedy enough for most tasks, but it falls short on the software and other connectivity options.

It has only two USB ports for example, with both of them located on the same side (and not at the back) and its interface is very rudimentary, designed to be controlled with the bundled remote control.

Don’t expect anything that can rival the UI of a Roku, Now TV or Amazon product. But having access to stock Android means that you can plug in a keyboard and browse the web (provided it's a wireless keyboard with a touchpad).