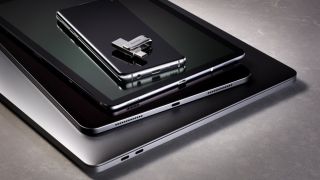 SanDisk has shown off its vision of the future of storage at CES 2020, including a portable 8TB SSD prototype targeted at smartphone users.

The news portable hard drives aim to offer the highest-capacity flash memory devices to store rich content on the go, with the company saying that its prototype features USB speeds of 20Gbps using the SuperSpeed USB protocol.

Other new SSD drives announced also include a 1TB drive for both smartphone and laptop users, aiming to provide an easy to carry backup for photos and other content that can fit in your pocket, or even a keychain.

Along with its 8TB device, SanDisk also announced a sleek silver finish 1TB Ultra Luxe dual connector drive (pictured below) that aims to work with the latest smartphones, tablets, and laptops.

SanDisk have a record of making quality hard drives for those on the go, such as the SanDisk Extreme Portable SSD 1TB which we reviewed favorably just over a year ago.

While there are a number of portable USB drives on the market, most have limited capacity and transfer rates by comparison to SanDisk’s latest models. Although no pricing information has been released as yet, both models should be available within the next few months.