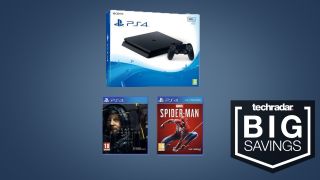 This is the best Black Friday PS4 bundle we've seen so far - for the 500GB model that is. So far we've seen plenty of places offering a PS4 with one game included but Very has gone one better, including not only Spider-Man but the newly released Death Stranding too.

That's right, for just £199.99 you can pick up PS4 with Death Stranding and Spider-Man. (Not in the UK? Scroll down for today's best PS4 deals in your region.)

That means you save around £130 and there's also the option to add on extras (although, you will have to pay for those).

PS4 500GB Console with Death Stranding and Marvel's Spider-Man | £199.99 at Very
This is arguably the best PS4 500GB bundle offer we'll see all Black Friday. Not only do you get the console but you also get two Sony exclusives - all for less than £200.
View Deal

Not in the UK? Check out the best PS4 prices in your region below: