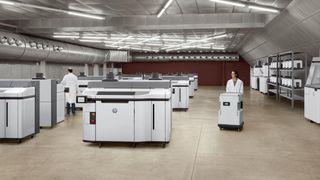 HP has revealed a new 3D-as-a-Service (3DaaS) subscription model for 3D printing to allow customers to ‘pay-per-build’ or opt for a one-year contract where the hardware and services are provided entirely for them.

The broad idea is to make the mass production of parts via 3D printing more accessible, scalable and affordable in general, with two different tiers of service initially available from HP.

The 3DaaS Base subscription service delivers automatic replenishment of 3D printing supplies, along with tracking of usage and billing, and both on-site and remote support.

It works on a ‘pay-per-build’ model with HP’s Jet Fusion 5200, Jet Fusion 4200, and Jet Fusion 500 series 3D printers. HP notes there will be a defined usage-based price which will apply for a one-year period, and this offering is available now in the US, Canada, UK and various other European countries.

The 3DaaS Plus subscription throws in the hardware, as well as installation, maintenance and support, as well as supplies and long-term consumables. HP says it’s ideal for “optimized in-house rapid prototyping and final part production”.

Initially, 3DaaS Plus will come with HP’s Jet Fusion 340 printer, although other hardware options will be introduced down the line. The Plus tier requires at least a one-year contract and costs $5,000 upfront, with the monthly payment starting at $3,500. This service is expected to be generally available in 2020 in the US and UK, as well as some other European countries.

The announcements HP made, which came as part of the build-up to the Formnext 2019 3D printing conference, also revealed that HP is expanding its Digital Manufacturing Network, a community of service providers, with new partners including Prototal in Europe, and Solize in Japan.

And as we saw yesterday, HP is already making great strides with its Metal Jet technology when it comes to the mass production of 3D-printed metal parts for cars (in partnership with Volkswagen).

It’s expected that as soon as 2021, structural parts of cars will be 3D-printed and just as safe as traditionally produced parts, except lighter with all the benefits that could entail (in terms of fuel economy for starters).