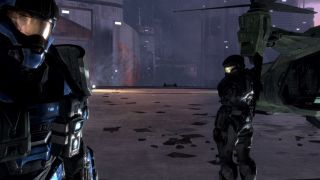 Halo: Reach is out now on PC, and in the run up to the release, we were promised that it could run at 4K resolution at 60 frames per second (FPS) on an old graphics card.

But what happens when you run Halo: Reach on the most powerful consumer graphics card in the world, the Nvidia RTX Titan? We did just that, and found that Halo: Reach managed 8K resolutions (7,680 × 4,320) at a rock-solid 60 fps.

We played the game using a very powerful gaming PC provided by Chillbast, along with Dell's UltraSharp UP3218K monitor.

We used the 'Enhanced' graphical settings, which updates the textures and adds effects that weren't included in the original. Even so, during our playthrough at 8K resolution, our framerate counter never dropped beneath 60 fps.

We've seen a number of recent games, such as Gears 5, unable to run at 8K with playable framerates, even on some of the most powerful hardware in the world.

We also recently tried playing Red Dead Redemption 2 at 8K, and while the best of a PC Chillblast built for us put up a decent fight, 8K resolution still seems to be too intensive for modern games, even on extremely powerful hardware.

However, with Halo: Reach performing so well at 8K, perhaps that's where the (immediate) future of 8K gaming really lies: in older games with updated graphics.

While Halo: Reach is nearly 10 years old, Microsoft has done a great job of porting it and updating it for modern PCs, and at 8K resolution it really looks stunning.

The performance is so good, that it's unlikely you'll need quite as powerful a rig to run it at 8K. And for the vast majority of people who don't have an 8K monitor (Dell's is currently the only one on the market), then the good news is that the game runs even better at 4K.

In a way it's quite funny. We've just glimpsed the future of PC gaming courtesy of an old console game. Mainstream 8K gaming is still a long way off, but once it gets here, 8K at 60 fps is going to really drop some jaws.