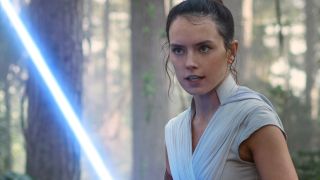 Star Wars: The Rise of Skywalker had its world premiere last night, and Disney and Lucasfilm have let attendees tweet their non-spoilery reactions ahead of an official review embargo. The response is mostly very positive, with people praising the film's epic scope, and how it picks up threads from past Star Wars movies like The Force Awakens and The Last Jedi.

The film itself is out on December 20 in the US, though some territories like the UK are getting it a day earlier on December 19. If you want to insulate yourself from all information on the film, though, it might be worth skipping these and waiting for the film to release.

Let's start with some praise for how the film addresses unanswered questions from the sequel saga:

Just stepped out of #TheRiseofSkywalker. It’s an immensely satisfying and MASSIVE end to the saga. It somehow addresses issues, problematic characters, and most unanswered questions from The Force Awakens and The Last Jedi too. pic.twitter.com/TMKeXCXuUxDecember 17, 2019

Wow. Wow. Wow. #TheRiseOfSkywalker delivers. So much happens in this film it’s hard to get my head around. But it gets this epic ending right. So right. JJ Abrams and team nails it. And gives a whole new appreciation for The Last Jedi in the process. Please avoid sppolers!December 17, 2019

When people talk about #StarWars , they talk about their childhoods. Their best memories. The people they loved and shared it with.#TheRiseOfSkywalker brings back all those feelings. And then some.I absolutely loved it. And now I feel ... pic.twitter.com/5wkQh6v97GDecember 17, 2019

Wow, just wow. Buckle up guys, #TheRiseofSkywalker is an action adventure that doesn’t stop for all 2 hours and 21 minutes. It will make you laugh, cry, and stand up and cheer. It sums up everything we love about #starwars, while being completely new and unique. JJ, you did it.December 17, 2019

Now, let's counterbalance that with some claims the film is a bit overstuffed with plot, and that the addition of Emperor Palpatine isn't entirely successful...

My favorite Star Wars are the ones that take their time and focus on the characters. The whole first half felt like all exposition. It does get better. And Lando rules. But there’s just so much plot it feels so rushed. And the Emperor stuff is so weird.December 17, 2019

At worst, I expected #TheRiseOfSkywalker to be a well made movie that I didn't like or whose story choices I disagreed with. I was not expecting a genuinely bad movie with video game plotting, thin characters, weak action and endless exposition of no consequence. Heartbreaking...December 17, 2019

Deadpool creator Rob Liefeld, meanwhile, calls it "the ultimate fanboy jerkoff", which is quite the turn of phrase.

RISE OF SKYWALKER is the Ultimate Fanboy Jerk Off! I loved it. I LOVED IT!!! I LOVE IT! J.J. stirs your love of this fabled franchise at every possible opportunity. Daisy Ridley is as charismatic as anyone on screen, she carries this final chapter, lifting it to new heights!December 17, 2019

That's a lot to take in, but at a cursory glance of Twitter, the response is mostly pretty good. It sounds like we're in for a busy film with a lot of plot.

Look out for our thoughts on The Rise of Skywalker later this week, ahead of its worldwide release.