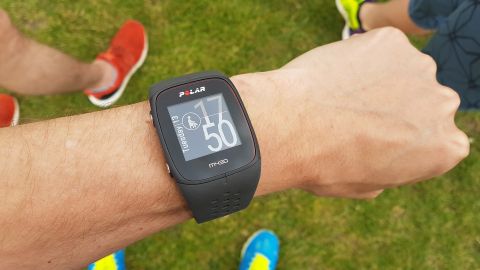 The M430 has a 240mAh battery which Polar claims offers 8 hours training time with GPS and optical heart rate in use and up to 20 days if you’re just using it to tell the time and track your general activity.

A great feature that’s been added here is the ability to change the settings to sacrifice some GPS accuracy to extend the battery life, this is particularly useful if you’re running into ultra territory where you don’t necessarily need your pacing with quite as much accuracy.

In terms of normal usage, let’s say a week with 2-3 runs of less than an hour plus a long run of around 2 hours, we found you’d probably need to charge the M430 once.

If you’re looking at continuous runtime with heart rate and the highest GPS accuracy level engaged, we got well over 8.5 hours and it was still going long after we’d stopped.

We’d love to see the same battery-saving logic applied to the heart rate sensor, but sadly that’s not yet possible.

One thing that’s definitely changed for the worse is the way you charge your M430. The Polar M400 could be stuck onto any standard micro USB cable that you’d use to charge an Android phone or a billion other devices in your home and at work.

But with the M430 Polar has introduced a custom-made USB port that requires a USB cable with a unique connector, meaning there’s only one cable that can charge your watch.

Worse still, that special connector doesn’t clip in very firmly and on several occasions we came back to find it had fallen out and our watch was frustratingly uncharged.

The Polar M430 is an accomplished running watch at a reasonable price, and if you've read this far into the review it should be well worth considering. But it's not for everyone, or the only option.

This is a great tool for anyone who considers themselves a goal-driven runner and while you don’t have to be chasing a personal best or training for a marathon to see the benefits, if at some stage you think that’s where you’ll end up, this is a device that’s capable of coping with developing running ambitions.

For those whose goals already include faster half and marathon times, shorter ultras or just fat-burn or general running fitness, the M430 has enough features to be a really useful training and racing aid.

If you’re one of the people who bought the best-selling M400 and you’re looking for a familiar upgrade that brings some new skills to your training, then the M430 should satisfy, though there will almost certainly be people who’d like to see more done with the design and screen.

For everyone else, this is a competent running watch with a rich feature set, some great all-day activity and sleep-tracking features and for under $230/£200/AU$330 won’t disappoint.

We're impressed by the Polar M430 but there are other fine fitness-focused wearables too, such as the following three.

The first Suunto with heart rate tracking from the wrist, the waterproof Spartan Sport Wrist HR is another pulse tracking multi-sport watch, but this one is built for runners who want a bit more adventure.

It’s a chunk pricier than the Polar M430, but then if you’re looking for a tool that’ll take you from tarmac to trail then the crisp, toughened color touchscreen, GPS route navigation, a compass and up to 16 hours battery in training mode, fit the bill.

The successor to the Garmin Forerunner 225, the Forerunner 235 carries much the same specs and features including built-in heart rate, 24/7 activity tracking, training plans and VO2 Max stats to provide similar fitness and recovery insights, but comes with a sleeker, more modern design.

There’s a color screen, smart notifications and syncing with Strava via Garmin Connect. Those with smaller wrists will also favor the fact that you can swap out the Forerunner 235’s bands for a better fit than the M430’s one-size-fits-all fixed bands.

TomTom’s latest wrist-based heart rate tracking tool also offers GPS tracking for multi sport and 24/7 activity tracking, but where it differs from the Polar M430 and the Forerunner 235 is the ability to store up to 500 songs locally on the watch, meaning you can whack on a pair of Bluetooth headphones and run phone-free.

The web tools aren’t anywhere near as advanced as Garmin Connect or Polar Flow, but this is a strong alternative if you love running with music but hate bringing your smartphone.