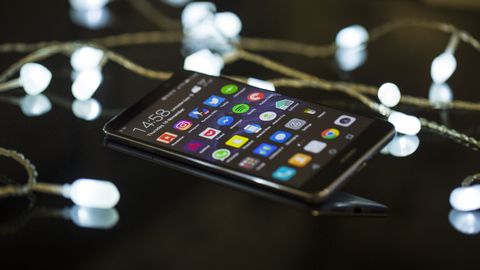 Huawei may have cracked the battery life issue with the Mate 9 – we’ve been impressed by how well the phone has performed throughout our testing.

The Mate 9 comes with a 4000mAh cell, and that has to power a large Full HD screen, a powerful processor and much more.

Huawei claims a power user will experience a full day of battery, and that you'll get two days out of a charge if you use the phone less regularly.

Most phone manufacturers claim this, and it's usually not the case, but during our testing, even with intensive use we didn't drain the battery by the end of the day.

On average we’d get to around 2pm and still have 75% of the battery remaining. That’s almost unheard of for a smartphone in 2016, and it's seriously impressive.

The Mate 9 didn't fare as well as we'd hoped in our video battery test though. This involves playing a 90-minute video at full brightness with connectivity options on, and during that time the Mate 9 lost 17% of its battery, meaning you could watch five hour-and-a-half-long films and still have battery to spare.

It's a decent showing, but it's not as good as some of the competition – the Galaxy S7 and Galaxy S7 Edge only lost 13% and 14% of their charge respectively.

The Mate 9 is charged via the USB-C port on the bottom of the phone. The phone also supports fast charging, which Huawei claims can get you to a full day's worth of battery in just 20 minutes.

We've yet to test this properly, as our unit had a Chinese adapter in the box, but we'll put fast charging through its paces soon.

Want to see the Huawei Mate 9 battery in action? Take a look at how it compares to the iPhone 7 Plus and Huawei P9 in the video below.

The Huawei Mate 9's camera is the same dual-lens unit that debuted on the Huawei P9. It's co-engineered with German camera maker Leica, which has been in the business since 1849, so knows what it's doing.

There's a 12MP colour sensor and a 20MP monochrome (black and white) one. Combined, these deliver what Huawei believes is a more detailed image than you’d get from a single sensor.

The monochrome sensor specializes in capturing detail, with the theory being that when you combine the mono image with the color one the overall result is very clear and detailed. And the good news is that the Mate 9's camera will likely impress you with what it can do.

We shot some fantastic images while using the phone – although it’s still not the best camera on the market right now.

If you want a phone that you can whip out of your pocket and take a high-quality snap with immediately, the best option is undeniably the Samsung Galaxy S7.

We found the Huawei Mate 9 struggled with focusing, especially in low light. Tapping on the screen to focus didn't necessarily help, and it was difficult to focus on specific areas with ease.

An interesting feature is the option to shoot in pure black and white, using the 20MP camera.

This lends a nice quality to the right subjects, but take note that you won't be able to change an image to color after you've taken it – it doesn't work like a filter in a camera app, or Instagram.

In good lighting the Huawei Mate 9's performs extremely well, and you can shoot some highly detailed images using the auto mode; it’s just a struggle when the lighting isn’t great.

There’s also a Pro mode, which you can dive into to tweak shooting settings, but you’ll need to know your ISOs from your f-stops to make the most of it.

One of the highlights of the Mate 9's camera is a feature called Light Painting, which enables you to create some amazing images in dark conditions using a long exposure – we captured this on Bonfire Night with a sparkler.

It's only for very specific occasions, but when it works you can get some striking images by just holding the phone still and pointing it at a moving light.

One benefit of having a dual-lens camera is the wide aperture mode. If you take a photo in this mode you'll then be able to adjust the point of focus post-shoot, days or even months after taking the original photo.

It means you can just tap on an object or area on the screen, in the foreground or background, to completely change the focus of the image.

Sometimes this can work like magic, but on other occasions it doesn't work quite so well, and will make the 'in-focus' background of an image appear blurry. We'd recommend using this feature for larger objects or landscapes to get the best effect.

You can record video in 4K, Full HD and 720p, and there are also options for slow-mo video.

Turning to the front camera, it’s business as usual here, with an 8MP front sensor. This does everything you'd expect, with the obligatory beauty mode to get rid of any pesky skin blemishes.

It’s high resolution, but again it struggles in the dark a little more than you’d hope for a phone at this price point.

We asked Huawei and Leica representatives whether the two firms have considered collaborating on the front camera, and we were answered with nervous laughter at the question.

That means we'd expect some big improvements on the Huawei P10's front-facing camera.