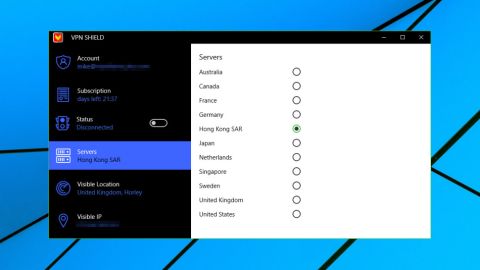 An underpowered VPN with minimal features and poorly designed Windows apps. If there's a reason to install VPN Shield, we're struggling to see it.

VPN Shield is a Polish VPN service which offers a basic set of features for what looks like a good price.

The company's servers are in relatively few countries, but they're reasonably well spread across Australia, Canada, France, Germany, Hong Kong, Japan, Netherlands, Singapore, Sweden, UK and USA. (There are no city-level locations, you can choose by country only.)

VPN Shield has its own apps for Windows, Mac, iOS, Android, even Amazon Kindle, making it easy to set up, and you can connect up to five of these devices simultaneously.

Payments are accepted via card and PayPal, and there's a 1-day free trial for everything but the Windows 7/8 desktop application (Windows 10 users can install an app from the Windows 10 Store, instead), extending to 3-days if you ‘like’ VPN Shield's page on Facebook.

VPN Shield's small-print is some of the most concise work we've ever seen, with both the terms of service and privacy policy squeezed into a lightweight 1,000-word page. That's great. The contents? Not so much.

The company collects a considerable amount of data when you connect to a server: the time, "device identified" (could be a type, could be a unique identifier), the choice of server location, "technical details of the connection (connection result, protocol, ports, etc)" which we suspect will include IP addresses, the total amount of data transferred per day, and the purchase history.

This is all session connection data and nothing to do with your activities when you're online, but it's still considerably more information than many other services collect, and there's also no information on how long it's kept.

VPN Shield is one of very few providers to offer a native Windows 10 app, so we were keen to try it out. Installation was hassle-free, we quickly created an account from the app, and a countdown showed our 24-hour trial had begun.

Windows apps generally try to be a little more visually polished than their old-style cousins, but VPN Shield's offering is probably worse. There's no simple connect screen, no colorful list of flags, no world map, no clever graphical touches at all, just a sidebar, some status information and a few text panels of options.

Would that app make up for this with its raw power and configurability, we wondered? Nope, it's one of the most limited VPN apps we've seen.

There's no OpenVPN support, for instance, the app is little more than a shell for standard PPTP connections. (That's such an insecure protocol that many providers have stopped offering it.)

The location picker is a plain text list of countries, with no ping time, server load figures, Favorites system, 'Recent Connections' list or anything else.

The Settings box is particularly sparse, with only an 'Autostart VPN on insecure wifi networks' checkbox and a panel explaining how to manually set up a connection on other PCs. (We suspect you could use this as a guide to setting up the VPN on other PPTP-compatible devices, although we didn't try it.)

We could forgive this kind of simplicity if the underlying engine worked well, but this one doesn't. Not only is there no kill switch to block internet access if the connection fails, VPN Shield may not even realize there's a problem. We forcibly closed the VPN connection, exposing our real IP address to the world, but the VPN Shield interface still showed our status as 'Connected.'

Speeds were around 70% of normal, at 35-45Mbps in the UK and 25Mbps in the US. That's usable, but disappointing, especially as PPTP's basic encryption gives it a speed advantage over our usual test protocol, OpenVPN.

The bad news continued until the end, with DNSLeakTest revealing a DNS leak with the client.

We switched to VPN Shield's Windows 7/8 client, to see if it performed any better-- but the results remained disappointing.

On the plus side, the client added support for L2TP and IKEv2 protocols, a major improvement in security.

But the interface was even worse, with options only accessible by right clicking the client's system tray icon. There were no significant new settings, we found the same DNS leak, and the client still couldn't handle a broken connection (it noticed when the VPN dropped, but still ended up telling us we were protected, when we weren't.)

VPN Shield's Windows apps are horribly limited, with virtually no features, and even the few basic functions you get don't work quite as they should. We wouldn't recommend the service, even if it was free.