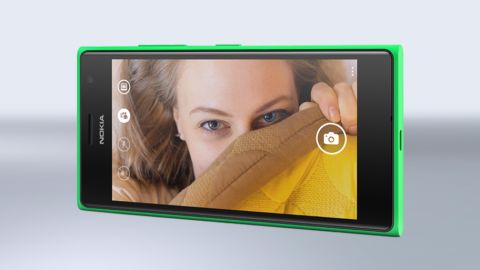 In order to compete at the lower end of the market, Microsoft has given the Lumia 735 a super powerful 5MP selfie camera. Unfortunately, the rest of this Lumia seems to have been a little overlooked.

The Nokia Lumia 735 is a phone unashamedly targeting selfie fans, the latest 'love it or hate it' craze. Nokia is by no means the only manufacturer to have noticed this trend, the HTC Desire Eye shows just how big this market has become.

It also means that it fights against the likes of the Sony Xperia Z1 Compact, HTC Desire 610 and Samsung's Galaxy S4 Mini, as well as the go to budget handset, the Moto G 4G.

This is certainly one of the fiercest ends of the market, so what has Nokia packed in to give the Lumia 735 the edge?

The most obvious feature has to be the forward facing camera, measuring in at 5MP, more than twice the size of nigh on all front facing sensors. Coupled with a 4G connection to share those images, and it seems Nokia knows its market.

On paper the Lumia 735 certainly seems rather impressive. Nokia has fitted a quad-core Snapdragon 400 SoC (system on chip) clocked at 1.2GHz backed up by 1GB RAM and an Adreno 305 GPU.

There is also 8GB of storage, backed up by 15GB of Microsoft's One Drive cloud storage and up to 128GB via a microSD card. All of this is accessed via the 4.7-inch HD screen, with the 720 x 1280 resolution giving a density of 312ppi.

As with every Lumia handset, the Nokia Lumia 735 comes in a range of colours. My review handset is a rather bright green, with an equally bright orange available, as well white or black. Unsurprisingly, this brightly coloured handset is made out of plastic rather than metal, but it doesn't detract from the feel of Lumia 735 at all.

It does seem to pick up dirt easily though, 20 minutes in my bag on a walk left dark smudges that needed to be wiped off with a damp cloth. That meant removing the back plate, which is a little difficult, although I didn't ever feel like I was in danger of snapping it.

The curved 134.7 x 68.5 x 8.9mm frame reminds me of a much slimmer iPod Mini and sits very comfortably in the hand. The volume rocker and power/lock key on the right are the only buttons to hit and it is easy enough to do so.

In terms of ports the Lumia 735 has both the standard 3.5mm headphone port and microUSB port, situated in the middle of the top and bottom respectively.

The nanoSIM and microSD slots are both located behind the back plate, accessed by removing the 2220mAh battery.

I'm a big fan of the smaller screen as I have yet to buy into the phablet phenomenon, and it certainly fits the bill for the younger teen market that the Lumia 735 is going to be aimed at.