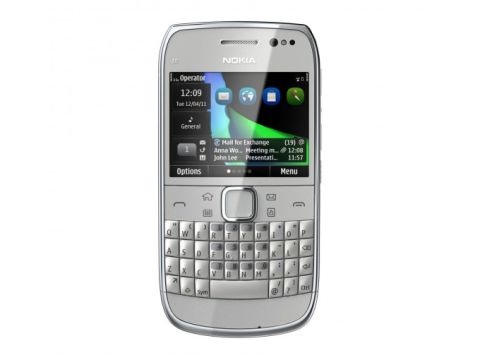 The E6 comes in black, white and silver

The Nokia E6 follows on from its E-Series QWERTY predecessors such as 2010's Nokia E5, providing the best E-Series camera yet, touch screen navigation and the home screen capabilities of the Symbian^3 platform.

The Nokia E6 is priced at £320, twice the price of its simpler sibling, the Nokia E5, but £80.00 cheaper than its weightier big brother, the Nokia E7.

When we compare the Nokia E6 with BlackBerry's offerings it is slightly cheaper than the non-touch BlackBerry Bold 9780, at £340.

This increased weight contributes to the Nokia E6's feel of robustness and high build quality, rather than making it feel unwieldy.

Another area which is often compared is the processing power of these powerful phones, with the Nokia E6 sharing its 680MHz ARM11 processor and 2D/3D graphics hardware acceleration with the Nokia E7, beating the BlackBerry Bold 9780's 624MHz processor.

The BlackBerry Bold 9900 with its 1.2GHz processor beats the Nokia E5 though. But, until the Bold 9900 becomes available for testing, we can't say whether this difference is worth the likely higher price.

The text improvements aren't visible on the Nokia E6, however, as all text input is achieved via the physical True-Type-esque keyboard. All of the other enhancements are present though.

Scrutiny of the OS improvements provided by Symbian Anna finds that the only real improvement on the Nokia E6 is the improved browser, as Ovi Maps can be downloaded separately for free and the new icons are available in Symbian next+ mentioned in the Interface section of this review.