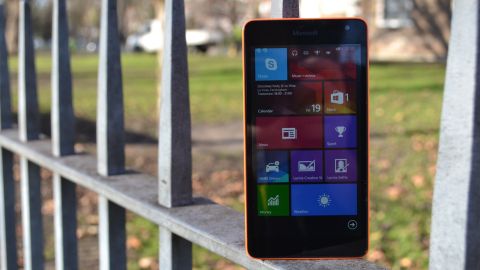 While this may be a Microsoft branded device, the Nokia Lumia legacy influence is still here. It may be built for a budget consumer, but with a 5-inch display and 5MP selfie shooter, there's still a lot to like here.

If you've handled one of Nokia's vast array of Windows phones in the past few years twirling the Microsoft Lumia 535 round in your hands will feel instantly familiar.

It's a plastic shell, with rounded corners and an anonymous black front. Slippy but able to take a few knocks, this screamingly orange device is yet another in a succession of absolutely unsubtle Lumia devices – and it's goshdarned cheap too at around £75 (roughly US$120, AU$160).

But this isn't a Nokia phone. Well, for all intents and purposes it is, but no mention of the Finnish brand can be found anywhere on this bargain priced smartphone. Where the old familiar logo was, the Microsoft branding now sits proudly above the 5-inch display.

This is one of the first phones to come with the Microsoft Lumia branding, after the software giant completed its buyout of the phone maker earlier this year. While the Nokia name will live on with other products, notably the iPad mini-esque N1 tablet, Microsoft has started to completely remove it from all its phones.

Though, nothing much has really changed. With Android and iOS dominating the high-end of the market, Windows Phone 8.1 devices tend to offer decent specs in an affordable package and the Microsoft Lumia 535 is no different. For your low outlay you will get a 5-inch display with a resolution of 960 x 540, a Qualcomm Snapdragon 200 processor, 8GB of internal memory and 1GB of RAM.

For the budget cost, those specs are definitely nothing to complain about.

In the past few months we've seen some impressive budget conscious smartphones, including the Android toting Moto G (2014) and fellow Windows Phone 8.1 devices like the Nokia Lumia 635 and 530 – so does the Microsoft logo mean that Windows Phone can now neatly compete in the low-end smartphone war?

Microsoft might have slapped its logo on the front and back of the phone, but this is unmistakably a Nokia Lumia.

The rear plastic shell pops off, revealing a removable 1,905 mAh battery and a space for a SIM card. Some regions will get the dual-SIM variant, but the UK at least will get the single SIM handset. There's also a microSD slot here, a necessary inclusion as the 8GB of internal storage will soon run dry when you start packing in apps.

The shell itself feels sturdy, but if you start to bend it the volume rocker does pop out of the shell, so… maybe don't play about with it too much or put it in your back pocket.

But even if you were to break or drop it, you could just swap the shell out for another one. Same goes if your eyes start to tire of the bright orange hue.

Almost as soon as I started using the Lumia 535 I knew it was going to be an absolute fingerprint magnet, and it soon proved to be a correct assumption.

The plastic picks up smudges all over, oily residue sticks to it and after about an hour of use I had to wipe it clean. An hour later, another wipe down. Corning's Gorilla Glass 3, which protects the screen, is also prone to picking up grime – so be ready, this is a high maintenance device.

Aside from the volume rocker and standby switch, both of which are suitable clicky and responsive, the phone is free from other buttons. This is down to Windows Phone 8.1 following Android's lead and allowing the use of on-screen controls.

A 3.5mm headphone jack sits on the top, while the ubiquitous microUSB charging takes its place on the bottom.

No, it doesn't possess a premium finish like the iPhone 6 or HTC One M9, but it also doesn't feel like a Fisher Price 'My First Smartphone'. It's fun, durable and well built and I've dropped it a few times with no damage, which is always a plus, especially when you're a clumsy tech journalist trying to avoid the wrath of angry PRs.