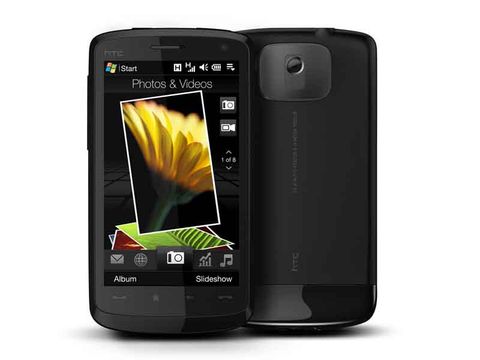 The Touch HD's biggest draw is its phenomenal touch screen

HTC's closest thing to an iPhone so far, with a terrific screen, decent camera, full connectivity options and excellent browser

HTC has been circling the Apple iPhone's lonely campfire for some time now, bringing out worthy alternatives that could rival and beat the Jesus phone in some categories, but not in others.

Chief among the iPhone's advantages has been Apple's mighty and unique touch screen, the best medium for viewing media in the palm of your hand. But now, even that looks under threat with the HTC Touch HD.

The HTC Touch HD comes packed with all the goodies familiar from recent HTC models, including Wi-Fi, HSDPA 3G (with up to 7.2Mbps downloads, speed fans), A-GPS with Google Maps, microSD memory expansion, easy web browsing and of course Windows 6.1 Professional working away quietly in the background, with the sensitive user protected from most of its oddities by HTC's TouchFLO 3D interface.

This offers a practical yet fun menu set that can be manipulated with one thumb. There's a 5-megapixel camera on board too but the HD's biggest draw is surely its phenomenal touch screen.

The biggest available on any Windows Mobile device, it's 3.8 inches and packs in 480x800 pixels, which makes the iPhone's 480x320 pixels seem measly by comparison.

It's ideal for viewing downloaded video files though it's not to be confused with true HD (it's good, but not that good), and though it's capable of delivering very good pictures in full frame mode, you'll probably need to experiment with your sources, as it can be quite unforgiving of poor quality compressed files.

There isn't much room for these in the 512MB onboard memory but if you get your HD from Orange they're throwing in an 8GB microSD card (it will take up to 16GB).

The camera, with 5 megapixels is at least a serious photographic instrument, unlike the iPhone's effort, but it suffers with comparison to the likes of Nokia's Nseries and Sony Ericsson's C-series big-hitting cameraphones.

Speed is an issue, since it takes the best part of ten seconds from accessing it on the menu to taking a pic but the results are decent enough if taken in good light. There's no flash, so low light isn't really an option, though there is autofocus.

Video fares rather less well however and tends to look blurry if there's any fast movement involved. There's also quite a bit of screen drag when you move the device around, which never looks good.

Viewing pictures is a fun experience though, as like other HTC models you can zoom in or out by twiddling your finger on the pics and move though your albums by brushing your finger across the pics.

Browsing with the HD is probably the best on an HTC Windows device so far and equal to that of the iPhone or the T-Mobile G1 (which incidentally is made by HTC).

There's a stylus which clips magnetically into the casing but there's really no need for it, since you can operate all the HD's onscreen controls by finger touch.

The browser (Opera by default, with no Explorer on board as far as we could tell) flips the screen from portrait to landscape automatically when you turn the device on its side and there's a zoom button in the corner.

When you press it, a scroll bar pops up which allows you to adjust pages to any size you like and you can also move them around by brushing them across the screen with your finger.

The music player allows you to view album art and sorts your tracks in the usual way, but this time, thankfully, there's a 3.5mm jack plug so you can replace the deeply average supplied ones. There's an FM radio on board too with 20 presets for your favourite channels.

Battery life was impressive for such a highly specced phone giving us two days of average use, though as with all Windows Mobile devices you can also stretch this by switching off non-essential apps and reducing the screen's brightness.

Other devices might offer better cameras, and better data input facilities (there's only an on-screen keyboard) and even fit better in the pocket, but all-in-all, and while the first generation Android device comes very close, the HTC Touch HD is the best alternative iPhone we've yet seen.