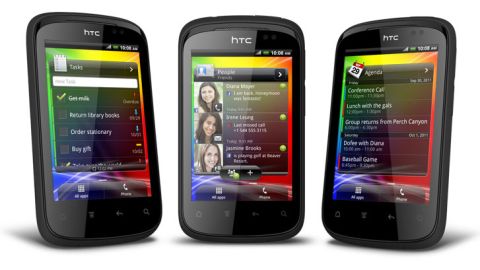 This starter Android smartphone is intuitive in its touchscreen interface

With its intuitive operating system skin, the HTC Explorer would make an excellent first smartphone.

Update: a year on from launch, the Explorer is still a very popular phone. We've re-reviewed the updated software with a comparison to today's hottest phones - can it still stack up?

Far from the grandest handset on the market, the hardwearing HTC Explorer is a strong performer on the entry-level smartphone scene, replacing the market-leading collection of multicore processors, minimalist form factors and high megapixel cameras with a first-time friendly interface, responsive touchscreen display and budget phone price tag.

Playing host to a less than iconic collection of specs and hardware features, the HTC Explorer instead boasts a combination of components that keep the mobile phone running to largely impressive speeds and with little fuss, all while retaining a wallet-friendly price point.

Lining up as a stubby pebble-shaped handset, the HTC Explorer's form factor is dominated by a 3.2-inch TFT capacitive touchscreen display that is responsive to the touch but lacks somewhat in image clarity, with the 480 x 320p, 180 pixels-per-inch screen sometimes providing highly grained content, with pictures and graphics lacking defined edges and pinpoint sharpness.

Building on this well-constructed, albeit far from inspiring base, the HTC Explorer features a life-proof rubberised rear that will help protect the handset from the inevitable knocks, drops, scrapes and scuffs that accompany a handset's lifecycle.

With a 600MHz Qualcomm Cortex A5 processor running the HTC Explorer's show alongside 512MB of RAM, the HTC smartphone is far from the fastest on the market, with the less than impressive 3.15 megapixel rear-mounted camera keeping the Android handset firmly within the budget smartphone sector.

Although down the lower end of the pricing spectrum, the HTC Explorer still plays host to the same collection of essential connectivity options as its top of the line HTC Sensation sibling, with 3G and Wi-Fi options partnering with Bluetooth capabilities to offer prospective users the full fleet of features.

Appealing to first time smartphone owners where it arguably counts most, the extremely reasonable HTC Explorer price sees you able to snap up the Android 2.3 device for under £100 on Pay As You Go in the UK or around $140 SIM-free in the US, or for free when splashing out as little as £10.50 (around $16) per month on a pay monthly contract in the UK that comes packed with a selection of texts, minutes and data options.

Despite landing considerably cheaper than a selection of its closest on-paper competitors, the HTC Explorer's screen, processor and RAM see the handset rivalling the likes of the Samsung Galaxy Ace and Samsung Galaxy Y, as well as RIM's entry-level BlackBerry Curve 9360.

With the entry-level smartphone market not always focusing heavily on impressive aesthetics and strong build quality, instead favouring cheap materials and simple construction, HTC's budget HTC Explorer goes somewhat against the grain with a largely sturdy construction pairing with a reasonably eye-catching design.

Lining up at a relatively chunky 12.9mm (0.51 inches) thick, the HTC Explorer is a phone that feels solid in the hand. Weighing in at a reasonable 108g (3.81oz), the Android smartphone is neither unnervingly light, like the high-end Samsung Galaxy S2 and a selection of its cheap, low grade plastic rivals, nor as heavy as an iPhone 4S, falling pleasantly in the middle with a reassuring heft to it.

With just three physical buttons to its name, the HTC Explorer's compact form factor is left largely untarnished, with the minimalist collection of hardened controls joined by a 3.5mm audio jack connector and a micro USB charging port on the otherwise smooth, round-edged finish.

Featuring a sleep/power button on the top of the handset, the HTC Explorer's upper right side plays host to the classic volume up and volume down controls. While the volume buttons fall within prime finger and thumb real-estate when holding the handset in a standard left or right handed manner, being built within the phone's rubberised rear panel ensures the controls are stiff enough not to make you worry about infuriating accidental presses.

Build quality far exceeds its budget price point, so the HTC Explorer is a handset that exceeds expectations on the design front, with the rubberised rear panel giving the device its own distinctive and unique look that offers a reassuring feel of added grip in the hand.

Adding a certain amount of style to the otherwise largely uninspiring rear, a brushed metal cut-out brings a bit of high-end appeal to the cut-price phone.

While the same wraparound rubberised back panel offers considerable amounts of reassurance against unavoidable knocks and scratches, in facing heavy drops the handset offers up little confidence, with the rear unit pulling apart from the device all too easily and likely to make a hasty exit when making contact with the floor.

In place of physical controls, the HTC Explorer features the Android essential collection of touch-sensitive controls with the trio of back, home and option buttons joined by an instant search option that offers quick access to Google and its world of possibilities.