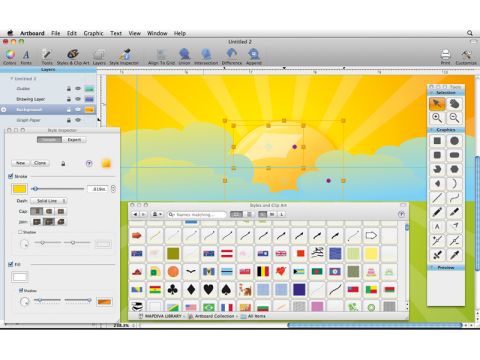 With Sketch, DrawIt and VectorDesigner, the budget vector graphics market is surprisingly crowded on the Mac. Mapdiva Artboard undercuts its rivals on price, and mostly lives up to its claim of being simple and direct, but there are a few major shortcomings that take the edge off the product.

When it comes to getting content onto the canvas, Artboard is slick. You get the usual object tools and a ton of clip art and pre-made styles.

Professionals might baulk at the idea of ready-mades, but though most are basic, many are useful (such as flags, maps and icons), and the feature seems suited to vector amateurs or the time-poor.

Object manipulation is generally simple and the app's performance is strong, but the immature nature of Artboard is regularly betrayed by its interface.

We found the inconsistency of data provision troubling: some settings (such as a regular polygon's sides) are in contextual menus, some (rotation, radii) only appear in tooltips, and the Styles Inspector is awkward to use and space-inefficient.

These things make Artboard less suitable than it should be for precise vector work, and we hope to see a more useful iWorklike Inspector in a future update; the lack of import options is also an issue.

Still, given its general usability and low price, Artboard is worth a look.