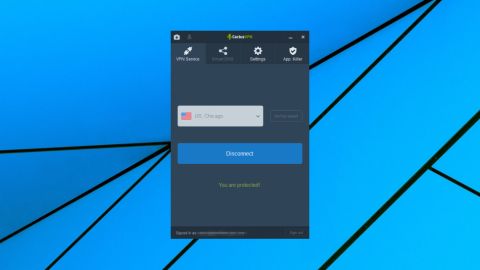 This VPN's list of servers is a short one, but nonetheless it's decent value for money, and no slouch on the performance front either.

Moldova-based CactusVPN is a small VPN provider which offers many more features than you might expect.

CactusVPN's network is minimal, at just 23 servers in 14 networks, but the company makes up for this in other ways. There's support for all the main protocols (OpenVPN, L2TP/IPSec, IKEv2, SSTP, SoftEther, PPTP); Smart DNS to access geoblocked websites; free proxy servers; P2P available on some servers; apps for everything (Windows, Mac, iOS, Android, Android TV, Fire TV), and setup support for routers, Boxee and assorted other platforms.

There are cheaper plans which give you access to just a few of CactusVPN's features, but they don't look like good value, to us. The US VPN and UK VPN plans are $4.99 a month billed monthly, for instance, $3.25 billed annually, but they only support the four US or UK servers, and they don't include P2P support or Smart DNS. Private Internet Access can give you full access to a much more comprehensive service for only $2.91 a month on its two-year plan.

A free trial enables sampling the service before you buy. It's only 24 hours long, but there are no stupid bandwidth or data limits, and you can sign up with just an email address. Payment details aren't required until you decide the service is for you, at which point you can pay with PayPal, credit cards, Bitcoin and more.

CactusVPN has a short but reasonably clear policy on logging, which it summarizes in this paragraph (we're leaving it unedited):

"CactusVPN have a guaranteed no-logs policy for our service. That means that we will not store any data relating to your activities while using any of our privacy solutions, and will not record, monitor, log or store any of your information. CactusVPN also guarantees that none of your information will be passed on to a third party. We do not store any IP addresses, traffic logs, connection timestamps, used bandwidth or session duration information that could be traced to a single person."

That's only 82 words, but it still manages to rule our most forms of traffic and session logging, something many competitors struggle to do in 1,000 words or more.

We do have a small issue, in that although the policy 'guarantees that none of your information will be passed on to a third party', further down the page a clause titled 'Sharing Your Personal Data' lists a few situations where the company might share data with others (subpoenas, court orders, legal processes, 'when this is necessary to protect our rights in court.')

Still, if the 'no-logs policy' is accurate, then CactusVPN won't have any significant data to share, so on balance the mildly contradictory language won't matter.

CactusVPN comes with clients and tutorials for Windows, OS X, Android, iOS and more. We grabbed a copy of the Windows build and took a closer look.

The installer gave us more control of the setup process than usual. This also introduces some complexity, for example with options to 'AutoStart CactusVPN GUI' and install a 'TAP-Win32 Virtual Ethernet Adapter', but sensible defaults mean you can ignore these if you prefer.

The Windows client opens with the familiar list of locations, and a Connect button. If you've ever used another VPN client, ever, you'll immediately know how to get connected.

You'll also quickly notice the lack of location-picking features. The client can sort the location list by speed, for instance, but you don't get to see server load or ping times. There's no Favorites system or Recently Accessed list to help you reconnect to commonly-used locations. And once you're connected, you can't choose another server until you've disconnected from the first.

Browsing the client's tabs reveals a small number of more interesting touches. Enabling Smart DNS may get you access to more websites, for instance. There's a system-wide kill switch, and an App Killer to forcibly close specific apps if the VPN drops. You get built-in DNS leak protection, too, although oddly that's turned off by default.

A quick check of the default CactusVPN OpenVPN settings suggested the service used AES-128-CBC encryption. That's not as capable as the AES-256-CBC used by the competition, although in the real world, it's unlikely to make much practical difference. It's still most unlikely that anyone's going to be able to snoop on your traffic, even at the most insecure or wireless hotspots.

Another problem materialized when we tested the client by manually closing the OpenVPN process, forcing the VPN connection to drop. A desktop notification immediately warned us of the problem, which was good; but the client refused to reconnect, displaying an error message each time, until we closed and restarted it. That suggests an internal problem in how the client is managing its connection state, but a normal connection drop won't involve the OpenVPN process being closed, so overall this may not have much real-world effect.

The issues continued on another tab, where we noticed a Submit Ticket button. Sounds great, right, the ability to start contacting support direct from the app? Unfortunately, clicking the button opened a general Contact Us page on the website, which told us 'Please, do not use this form for service support. If you have questions regarding your service, sign in to the client area and open a ticket. This way we can help you sooner.' Well, that's good to know, but life would be even easier if the client directed us to the correct page, in the first place.

Most VPNs claim that they can give you access to geoblocked websites, and with CactusVPN stating its Smart DNS also allows you to browse 280+ commonly restricted sites, we were interested to see how the service performed.

We began our checks by trying to access BBC iPlayer. Disappointingly, none of the four UK VPN servers got us in. US-only YouTube content was easy to view, but that's because it has barely any protection, and the VPN didn't allow us to stream anything from US Netflix.

CactusVPN's Smart DNS is an alternative system which plays with your DNS requests to hopefully change your virtual location (the company has an explanation here). If the VPN doesn't unblock a site, enabling Smart DNS might give you better results.

The technology didn't allow us to access US YouTube, which was a major surprise, as it's generally very easy to view. But Smart DNS scored where it really mattered, enabling us to stream BBC iPlayer and Netflix without difficulty. If website unblocking is top of your priorities, CactusVPN is worth a closer look.

In our speed tests, we found CactusVPN took fractionally slower than average to connect, but not by enough to make us concerned. If you haven't regularly used other VPNs, you might not even notice any issue.

UK performance was acceptable at an average of 50Mbps on our 75Mbps fiber connection. That's more than enough than just about anything you'd like to do, but the best VPNs typically give us 10-15Mbps more.

Connecting to our nearest European servers, in the Netherlands, saw speeds increase to a peak of around 60Mbps. We're unsure why - perhaps they don't get the same level of traffic as the UK servers? - but we're not complaining, either.

US speeds were good, too, at a capable 30-40Mbps. And even the most distant servers gave us decent results: 18Mbps from Japan, 11Mbps from Australia, 10Mbps from Singapore. We've seen marginally better, but there's enough here for browsing, streaming, and most other web tasks.

CactusVPN has its limitations, including the very short US/Europe-only list of servers, but what you do get provides reliable performance and is fair value for money.