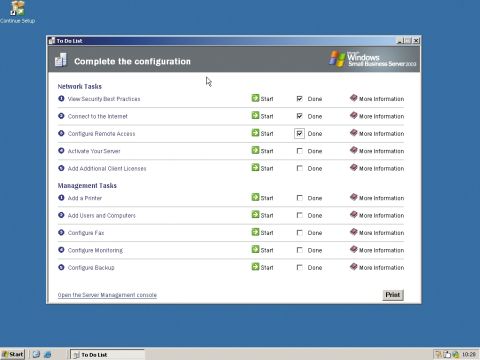 As it's been more than three years since we reviewed the original release of Small Business Server, there should be lots of exciting new things in this release, right? Wrong.

If this feels like you're stuck in 2003, then you're not that far wrong. SBS 2003 R2 isn't wholly without new features, but these are primarily brought about through adding software and by including patches as standard.

For example, Exchange now comes with a 75GB mailbox size limit rather than the old 16GB limit, because that was changed in Exchange 2003 Service Pack 2. You have to wonder which small businesses actually need 75GB of space per inbox, but it's a new feature nonetheless.

The two new software additions are SQL Server 2005 Workgroup Edition and Windows Server Update Services. The former is a cut-down version of SQL Server 2005, which sits just below Standard Edition and just above the free Express Edition in the grand SQL Server food chain.

The only things we would actually miss by just installing the Express Edition onto R1 of SBS 2003 would be the smarter searching and indexing system that's allowed in the Workgroup Edition. This is only really an issue, however, if you intend to put load a lot onto the database server.

Somewhat annoyingly, SQL Server is only included in the Premium edition of SBS 2003 R2, so to get it, you also need to pay for the inclusion of Internet Security & Acceleration Server 2004 (ISA2004) and FrontPage 2003.

The addition of Windows Server Update Services is interesting because it shows that Microsoft learned an important lesson when they forced SP2 on business users in April last year - that generated a lot of criticism from customers who suddenly found themselves with users complaining that their applications weren't working because the Windows firewall was now enabled by default.

WSUS allows administrators to download patches from Microsoft direct to the SBS server, then select which ones they want to distribute to their users.

This works perfectly for blocking things such as the otherwise-mandatory Internet Explorer 7 update, which means the system administrator now has time to test all the patches to ensure that they're working properly.

But again, we have to ask ourselves how many small businesses have a dedicated sysadmin willing to do this, or at least a part-time sysadmin who knows enough to be able to test patches before rolling them out? What you're paying for SBS 2003 was easy to use, and this hasn't changed in R2.

That said, it's still a darn sight easier than installing the individual components yourself: the pain of Activate Directory is entirely numbed with a wizard that just does it all for you, and even installing Exchange is a matter of sitting back and watching progress bars march across the screen.

As we reviewed the Premium Edition of SBS, ISA2004 and FrontPage 2003 were included, and they're no different here than if you were to buy them both individually.

While having SQL Server 2005 is really the biggest reason for existing SBS 2003 users to upgrade to R2, ISA2004 is definitely the big hitter of the Premium Edition: any smart enterprise cares about their security these days, and ISA is the perfect fire-and-forget proxy server for Windows servers.

If you have a particular need for SQL Server, which the free Express Edition simply can't satisfy, then you'll be happy to hear that SBS 2003 client access licences are still valid in R2. But if you couldn't care less about SQL Server, there simply isn't enough here to justify the upgrade for existing SBS 2003 users.

With Windows Vista on the horizon and Exchange 2007 as good as released, SBS 2003 just seems like a stop-gap measure until Microsoft can refocus all its efforts on the server side. All the 2003s in the version numbers here point to one thing: that you're getting old technology, which has been reheated to make it look more interesting than it actually is. Paul Hudson