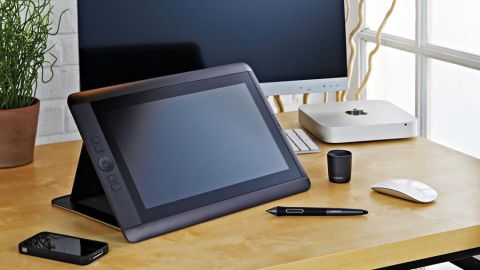 The Cintiq's unique selling point has always been the ability to draw onto the screen, and with its 13.3- inch screen and 1,080 x 1,920 resolution it's bright and responsive, making the user experience as intuitive as ever.

The screen has a matt coating that makes drawing tactile, and unlike its bigger brothers, it doesn't have the problem of overheating, so you can safely use it on your lap.

It comes bundled with a new "Pro Pen", which features the same high level of pressure sensitivity and tilt recognition that we have seen in the previous generations, but with a new tapered and lighter design. Even when close to the edge of the screen, minimal detail was lost and the lines were accurate in our tests.

If you look closely, there's some discrepancy between the tip of the pen nib and the contact area due to the gap between the glass and the screen itself. However, it's less than in previous models thanks to the Cintiq's new slimline design, and once you're using it regularly it's barely noticeable.

Included in the package is a plastic stand that allows you to position your Cintiq at three varying angles, which is ideal since all artists have different preferences about the optimum drawing position. However the stand is made from a flimsy plastic and didn't always feel completely stable on our desk.

One key feature that was missing is multi-touch, which after using the Intuos for many months is now second nature. With its four programmable keys and rocker ring, additional functionality can be added to the tablet, but it lacks that hands-on feel.

The other main problem we encountered was connectivity. The Cintiq 13HD comes with a three-in-one cable that handles USB, HDMI and power; when connecting to certain Macs (our 2012 MacBook Pro, for example) it needed an additional HDMI-to-Display Port/Thunderbolt adaptor to work, which is a further cost on top of the already hefty price tag. Wacom can't be expected to supply a cable for every eventuality, but this felt like a glaring omission.

Strong on its main function, but lacking when it comes to the details, the Wacom Cintiq 13HD is a slightly frustrating product that could have much better (and for the price, it really should be). A great screen and excellent sensitivity – if only it came with multitouch, a better stand and more cable options.