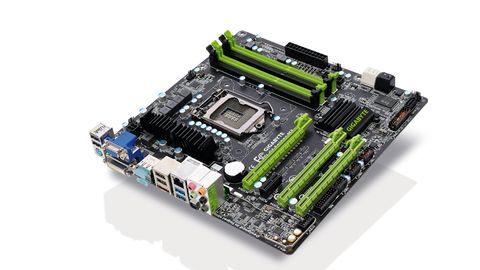 We've seen our fair share of powerful mini motherboards recently, and although this little G1.Sniper isn't quite as diminutive as its mini-ITX compatriots, it's still one hell of a strong board, with a feature list as long as Mr Tickle's arm.

It's also a little more grown up looking than the last Gigabyte G1 board we cast our eyes over. Sure, the G1.Assassin X58 performed fantastically well, but it looked like the A-Team had cobbled it together while they were trapped in a Nerf factory, and came with that ridiculous warning on the box that it was not to be used as a gun.

The G1.Sniper retains the green and black styling, as well as the top-end performance, but has done away with the pathetic firearm aesthetics. As a mATX board, it will still provide a quality basis for a small form factor gaming PC, and thanks to the increased real estate compared with the smaller form factor, you actually do get a bit more for your money too.

The main thing you get here is proper support for multi-GPU setups, and that includes both Nvidia's SLI and AMD's CrossfireX options. The mini-ITX boards simply don't have the space to cope with secondary PCIe slots, and the H77 mATX mobos can't split out the PCIe 3.0 connector into two x8 lanes to enable multi-GPU fun.

It has the ATX standard of four DIMM slots too, so it's really sticking the boot into the mini-ITX competition in terms of features alone. When you consider that it's also cheaper than the Asus P8Z77-I Deluxe mini-ITX board, the G1.Sniper starts to look even more attractive.

The performance is right up there with the more expensive (though smaller) Asus board, even in the various gaming benchmarks we've thrown at it. Gigabyte has really upped its game in recent times, and is now providing proper competition for the top boards once more.

Where it does stretch those long legs again is in the overclocking stakes. Without really spending a whole lot of time digging around in the BIOS, I managed to hit a rock-solid 4.8GHz clockspeed. That's the sort of speed we were getting out of the RoG Maximus V Formula, which is a full extended-ATX board with all of Asus' tech wizardry thrown at it.

The fact that this diminutive board can keep pace with those big boys is impressive, and shows just what a sterling gaming machine you could make with this at its base. You don't necessarily have to want to build a wee machine for the G1.Sniper M3 to make sense, either. It'll happily fit in a full-size ATX chassis and still deliver all the performance we PC gaming folk crave.

As you might be able to tell, I'm pretty impressed with this little board. For the money you're dropping on it, you'll pick up a board that's capable of standing toe-to-toe with pretty much any of the full spec boards around right now. If you can bring yourself to ignore the faintly unpleasant Incredible Hulk-esque green styling, you'll be one happy gaming bunny.