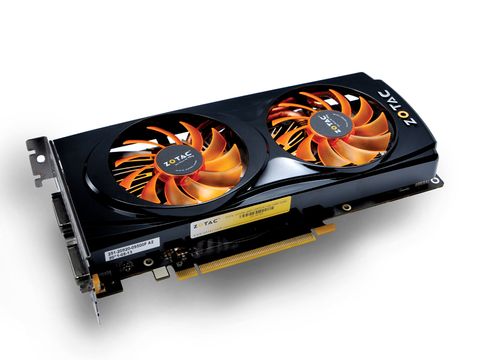 As noted in the previous review of the MSI N560GTX Twin Frozer II, Nvidia has taken the rather unusual step of not producing a reference board design or a real set of stock speeds that manufacturers are obliged to adhere to for the launch of the GTX 560.

Instead Nvidia has allowed a core clock frequency of between 810MHz and 950MHz to be used. Among the manufacturers taking the most advantage of such leniency is Zotac, who certainly hasn't messed around when it comes to producing an overclocked version of the GTX 560.

Zotac has dived straight in and tweaked the core to the highest core clock speed that Nvidia recommends – 950MHz – for its GeForce GTX 560 1GB AMP! Edition. That is 140MHz faster straight out of the box than the reference design – if there had been such a thing for the GTX 560.

Well known for producing seriously overclocked boards in its AMP! range, that Zotac has taken this step should come as no real surprise.

It doesn't stop at the core clock either because Zotac has matched the core speed with some equally high-clocked GDDR5 memory, pushing it to the recommended (1,100MHz, 4.4GHz effective) limit as well.

Astonishingly, Zotac hasn't even stopped there – the card still has a tad more headroom when it comes to overclocking.

We were able to get our sample running nice and stably with a core speed of 1GHz and a memory clock of 4.5GHz. The reason we were able to get to these speeds is that Zotac has used a core voltage of 1.14V, which is part of the reason why the card has to come with some serious cooling.

The cooler has been designed to get as much heat away as possible in a confined space. The card just about measures 23cm long, which is around par for a GTX 560 card. Sitting on top of the GPU is a copper plate and on top of that is an array of aluminium cooling fins, while three copper tubes run from the base plate to the separate compact multi-finned heatsink.

Sitting on top of both the array and the heatsink are a pair of 11-bladed fans. The cooler is finished in black with orange fans, so not only does it work rather well it looks the part too.

Zotac's board shows just how well the clock speeds on the GTX 560 ramp up and the cooler design works well. Although the card does tend to get a bit warm when you really push it, the fans never reach anywhere near screaming pitch.

While the GTX 560 1GB AMP! Edition may well be the fastest example of the GTX 560 architecture, the big issue is the price.

If the price could drop to around the £150 to £160 mark, then choosing the GTX 560 AMP! would be a bit of a nobrainer. However, as things stand, you are far better off forking out that extra tenner, which represents excellent value for the performance jump you get in GPU terms.