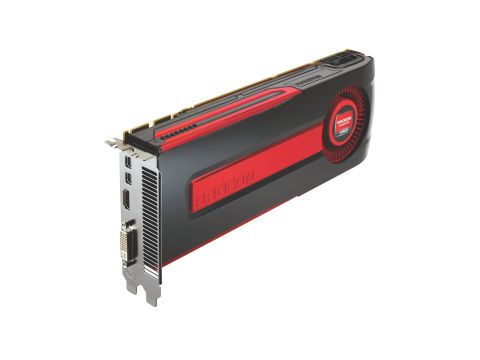 It may well be the fastest single-GPU card around, but the price is absolutely prohibitive.

So here it is, the AMD Radeon HD 7970 and, for the time being, it's the fastest graphics card around.

AMD has blinked first and opted to release its brand new graphics card architecture before Nvidia, and just before the new year.

It's a brave move by AMD though. Bringing out a radically different graphics design spec, compared with its previous vector processors, in the same year as it brought us a brand new CPU architecture.

Especially given the depressing failure of the AMD FX chips.

We've seen little bits from AMD about its new architecture, the plainly-named Graphics Core Next, before, but now it's humming away in our test bench and throwing pixels and polygons around our high-res screens without a care in the world.

Well, maybe the AMD Radeon HD 7970 does have some cause for concern considering Nvidia is set to launch its newest graphics architecture, code-named Kepler, in the early Spring of 2012.

Maybe that's why the timing of this release is so odd.

AMD has decided to effectively launch the Radeon HD 7970 just three days before Christmas, a notorious deadspot in technology news. We'll see the 'true' launch of the card, with the manufacturer's versions, coming early in the new year.

Though speaking with AMD board partners they're not allowed to release overclocked cards until well after launch.

So all they will be releasing are these reference Radeon HD 7970 cards with new stickers.

So, like a junior cabinet minister in a time of crisis, is AMD trying to bury the launch of the Radeon HD 7970?

Maybe it realises the market for a £450 graphics cards is absolutely minute. Maybe the forthcoming Radeon HD 7950 is the card that it wants to really concentrate on. Maybe it just wanted to make sure us tech journos had to work right up to Christmas this year.

Whatever the real reason for this staggered launch is, it's time we took a proper look at what makes this here AMD Radeon HD 7970 tick.