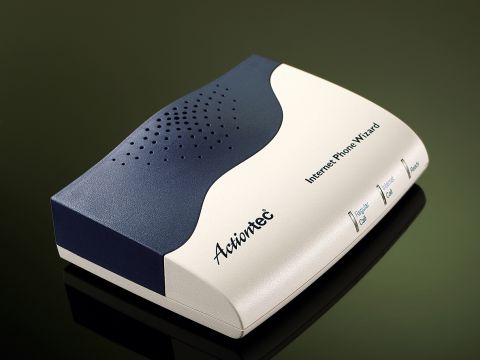 With products like this, the barriers to migration to cheap phone calls should soon be a distant memory

Voice over broadband IP (VoIP) is currently used by between one and two per cent of US households, but is growing rapidly and is estimated to hit 17 per cent by 2009, according to Jupiter Research.

Uptake of this excellent bill-slashing technology has been slower this side of the pond, and mores the pity. Many VoIP providers offer excellent quality of service now, and VoIP is starting to be built in to some broadband routers. There's never been a better time to switch to a VoIP telephone service provider!

Skype is the best-known VoIP service and the current market leader. There's already a slew of Skype-enabled products, and with each successive generation, the products are speaking the language of the man on the street. The Actiontec Internet Phone Wizard takes this process one step further.

Actiontec has obviously spent as much time designing the manual as they have the device itself. The guide has lots of colour images, screenshots and simple sentences. You don't have to know your broadband from your Bluetooth to figure it out.

The compromise is that you can also route your normal cable through the Phone Wizard. So, when your PC is switched off, you can make and receive calls, but over the landline rather than VoIP, so the calls will appear on your phone bill. It's only compatible with XP and Windows 2000 but, on the plus side, it coped with our numerous firewalls, and the quality of the Skype service is better than it once was. At the best of times, it's as good as any landline operator.