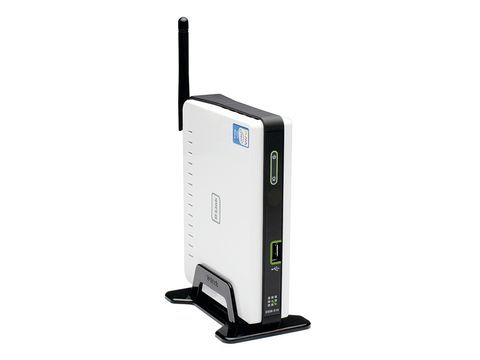 The DSM-510 is starting to show its age a little but if you're not a HD addict, this media player should suit you fine

The D-Link HD Media Player DSM-510 was originally designed to be used alongside Intel's Viiv devices to deliver streamed media through a wired or wireless connection. However, it works just as well with any Windows-equipped laptop.

It's an incredibly small box – about half the size of a standard D-Link Wi-Fi router – and is made from white plastic with a black band around the middle. It may be a small device, but it still manages to pack in an impressively wide array of ports.

On the front you'll find a USB port for adding a USB memory key or hard drive, for example, to view photos or run video locally. However, the majority of the connections are on the rear of the unit and offer HDMI and S/PDIF ports, as well as a Composite port and Ethernet connection.

There is also a Composite to SCART adapter in the box for connecting to older television sets, which is a nice touch.

Setting up the media streamer is fairly straightforward. You need to install the supplied software on your laptop, then organise your music and videos using Windows built-in Media Player software.

When it comes to streaming content, the HD Media Player DSM-510 is capable of handling 720p high-definition resolution files with a degree of ease, but it doesn't handle 1080p content as effectively.

File support is excellent, as you'll find that the streamer can handle all the most common formats with ease. We found that only the more obscure audio and video codecs proved difficult to run.

The remote control supplied is a little on the large size, but comes with a full array of controls, with dedicated photo, video, music and server buttons, as well as player controls. We found it simple to navigate and it made getting the best from the unit really easy for even first-time users.

It's hard not to be impressed with the DSM-510, as the small size, comprehensive ports and no-fuss setup make for a nicely rounded product. However, it is starting to show its age slightly, as the lack of Full HD support shows its limitations.