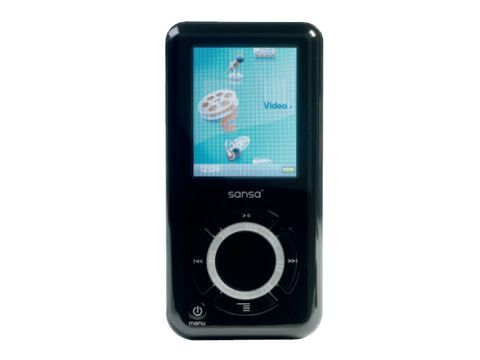 The screen may be small, but offers superb picture quality

Some flaws, but its awesome looks, operating system and performance make it highly recommended

Let's not beat around the bush: SanDisk's Sansa media players are gorgeous. The e270's glossy, black styling and blue illuminated control dial are so suave and irresistible that they're likely to induce serious gadget envy in others. Build quality is of the highest order too. It feels robust and weighty due to the solid, scratch resistant 'Liquidmetal' back casing, but this high-quality craftsmanship is reflected in the price tag.

Like the Ulysses and LG players, the screen measures 1.8in, which is small, but the panel used offers higher resolution than the Ulysses. Beneath the screen is the iPod mimicking control dial, with play, skip and menu buttons surrounding it. It's easy to get the hang of, but the buttons are narrow and too close to the raised dial, making them a little tricky to press with your thumb.

Video files need to be converted on your PC using the supplied software, which will accept AVI, MPEG1, MPEG2, MPEG4, DAT, ASF, MOV and WMV. Long files are broken down into a series of shorter files during conversion.

The software refused to import a selection of recent DiVX movie trailers downloaded from the internet, but handled older DiVX files with no problems. Image files also have to be converted, but the software is compatible with JPEG, TIFF, PNG, BMP and GIF. Thankfully, the conversion process is quicker than others in this group test.

Hook the device up to a PC and it appears as a folder, into which you can drag and drop files directly. Alternatively, files can be synchronised using Windows Media Player. It's compatible with MP3 or WMA files only, and supports MS PlaysForSure subscription music. The onscreen menus are superb, boasting attractive, brightly coloured graphics. Media content is presented in simple, legible lists, and navigating them is intuitive due to the responsiveness of the control dial.

The e270 boasts a MicroSD card slot, giving you extra memory capacity for music or image files, and SanDisk reckons you'll get up to 20hr of juice from the rechargeable and replaceable battery (if you only play audio). Elsewhere there's a voice recorder function and a series of Music EQ modes (including unusual genres such as Hip-Hop).

The e270 launched in the US with an FM tuner, but it's missing from the European version, giving the much cheaper Ulysses an advantage.

Video playback is superb. Because of the screen's comparatively high resolution, the images are sharp allowing you to make out the smallest of details. Cleverly, video is rotated to fit the screen horizontally, making it look much bigger than it does on other 1.8-inch screens. The image is bursting with colour and playback is smooth and glitch-free.

Music playback is of a similarly high standard. Audio files sound crisp and clear, but the Music EQ modes don't make much difference. The Sansa e270 is a top quality product that justifies its price tag with killer looks, solid build quality and superb video and audio performance. A triumph. What Video Staff