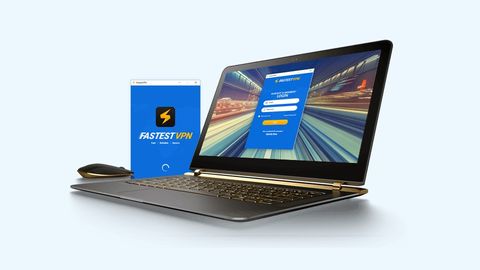 FastestVPN gives you a lot for your cash, but the Windows app needs work before we would trust it fully. Try it, but carefully, and run your own leak and other tests to see how it works for you.

FastestVPN is a Cayman Island-based VPN which offers a lengthy list of appealing features for one of the lowest prices around.

There are servers available in 35 locations across 29+ countries, for instance. Ad and malware blocking. Custom apps for Windows, Mac, Android, iOS Roku and Kodi, Chrome and Firefox extensions, OpenVPN compatibility to enable installing it everywhere else, and support for connecting up to ten devices simultaneously, twice the industry average.

The list goes on, with DNS leak protection and kill switches to protect your identity, servers optimized for P2P, and 24/7 support via live chat.

The FastestVPN website has a clear headline stating that the service has 'No Logs whatsoever!', going on to say 'We never log your internet activities. Nobody can track you back after you’ve visited a particular website, while connected to our server.'

Heading off to the Privacy Policy, we found much the same message, with a little extra detail: 'We do not store your logs in anyway. Any information or logs related to your browsing history - the websites you visit, the content you download or stream, your traffic destinations, or your DNS queries - stays with you and you alone.'

While this sounds great, there's no way to know whether the company is living up to these no-logging claims. It's much the same story with most VPNs, but a few (TunnelBear, NordVPN, VyprVPN, more) have put themselves through public audits, giving real evidence that they're doing what they promise. That's a big improvement on the usual 'you can trust us, no, really' approach, and we hope more providers will do the same over the next few years.

FastestVPN's Windows client looks good, with a bright and cheerful interface that works more or less as you'd expect. Your preferred server is clearly displayed, you can quickly browse the others on a list, and a big Connect button protects you on demand.

Settings are kept to a minimum, with just three options to choose your protocol (OpenVPN, IKEv2, L2TP, PPTP), launch the client with Windows and enable or disable a kill switch.

Although this is fairly simple and straightforward, there are a few usability issues. When connecting, for instance, there's no desktop notification to tell you when you're protected. And hitting Disconnect always gets you an 'Are you sure?' message, requiring an extra click you won't usually see elsewhere.

There are more significant problems, too. We tried forcibly closing an IVEv2 connection with the kill switch turned off, and the client also failed to raise any alert, instead showing it was still connected. Our internet access was blocked, so there was no privacy risk, but it would certainly confuse the user.

Testing the kill switch revealed another issue. When we manually closed our connection, the client successfully blocked internet access, but not immediately. Our test software showed that for a brief period of time, perhaps just a fraction of a second, our real IP address was exposed to the outside world.

We've seen far worse client problems - many don't have kill switches at all - but they have to be a concern. Hopefully FastestVPN will address them soon in upcoming updates.

The FastestVPN website isn't shy about its website unblocking credentials, boasting that the service allows you to 'stream, buffer, watch and listen content that is censored and geo-restricted – from anywhere around the world.'

Our real-world experience was a little different. When we connected to FastestVPN's UK server, for example, it couldn't get us into BBC iPlayer, with the site displaying its usual 'this content is not available in your location' error.

But the good news didn't last, and we weren't able to stream Netflix via any of FastestVPN's seven US servers.

If website unblocking is top of your priority list, then, FastestVPN is likely to be a disappointment. You'll get much better results from competitors like ExpressVPN, Surfshark, VPN Unlimited or VyprVPN.

FastestVPN claims to block IP and DNS leaks, and our tests confirmed this, with websites including DNS Leak Test, DNS Leak and IPleak unable to find any issues.

FastestVPN also includes ad blocking, at least according to the website. We're sceptical of the type of ad blocking included with many VPNs, as it often makes no apparent difference at all, but FastestVPN was a surprise: it made even the most ad-packed pages readable again. The system isn't as effective as free tools like uBlock Origin, but it's good enough to be useful, especially as blocking at the VPN level means it automatically works on every device you connect to it, without having to install any further software.

We ran some basic checks on every one of FastestVPN's 35 locations with an automated test suite, and the results were also very positive. Connection times were fast at an average 3 to 5 seconds, latencies were normal, and geolocation checks showed all servers were providing IP addresses from the advertised countries.

Our speed tests found FastestVPN delivering 50Mbps in the UK on our 75Mbps test line. That's a little slower than usual, but only heavy downloaders are likely to notice any issues.

Near UK locations gave variable results, but were generally similar, with for example Netherlands also reaching 50Mbps, and France a little disappointing at 35Mbps.

This pattern continued with the US servers, where speeds ranged from 25 to 50Mbs. And even switching to the more distant servers made little difference, with Brazil, Australia, India and Hong Kong all returning capable download speeds of 20 to 40Mbps.

FastestVPN isn't the fastest VPN we've seen, or the most powerful, and its Windows app has some worrying technical issues.

There's plenty to like here, though, especially the low prices, and the service is worth a look for experienced users who are happy to run their own tests.