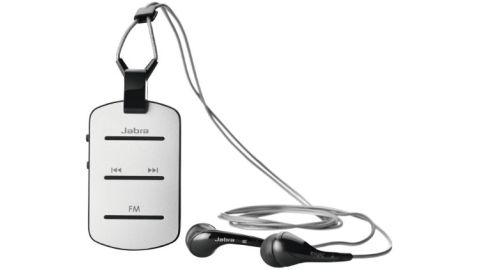 It isn't for everyone - you might not want to have a silver square hanging around your neck - but it's versatile and can be used as a hands-free car kit. It's a bit on the pricey side but it works well.

The Jabra Tag is the latest hands-free Bluetooth device for smartphones from a company that has a fine pedigree in such products. We've previously looked at the Jabra Halo2 and Jabra Extreme and been impressed by both. Ease of use, convenience and sound quality for music and phone calls were all excellent - can the Jabra Tag compare?

The Jabra Tag itself is a small, squarish device that is designed to be worn around your neck, clipped to your belt or just kept in a pocket. It then syncs up to a smartphone that can then be safely stowed away in a backpack, for example.

Pairing the Jabra Tag up with an iPhone 5 was extremely easy, and you can simultaneously pair the Jabra Tag with a second device, which is a nice feature.

Once paired you can control the connected smartphone via the buttons on the face and side of the Jabra Tag itself. There's a slight delay between pressing the buttons and the corresponding action being taken on the phone, but otherwise it works pretty well.

For a device that's supposed to be worn around your neck, it's not the most stylish of accessories, so clipping it to a belt will probably be the most popular choice for fashion-conscious owners.

The in-ear headphones that come with the Jabra Tag are comfortable to wear - with additional sizes of ear cushions included in the pack - and the sound quality is excellent.

A rather nice feature, however, is that you can plug in any set of headphones with a standard jack connection, which means if you have a favourite pair of headphones you don't have to ditch them to use the Jabra Tag.

Taking and receiving calls is handled well with just a press of a button, and the sound quality of the built-in microphone was excellent when wearing the Tag around the neck. A built-in FM radio tuner is perhaps a slightly unnecessary, yet still welcome, addition as well, with decent reception.

Due to the design of the Jabra Tag, it won't be for everyone. If you're not too keen on having a silver square tag hanging around your neck then you may want to go for a wireless headset with Bluetooth and playback controls built in, such as the Jabra Halo2.

However, the design of the Jabra Tag does have its benefits, most noticeably the ability to plug your own set of headphones into the Tag itself. We found this gives the Jabra Tag a certain amount of versatility - especially if you're a bit creative. For example we used an audio jack wire to connect the Jabra Tag to the auxiliary in port of a car stereo - turning it into a hands-free car kit. It's a bit on the expensive side, but for hands-free calling, it works great.