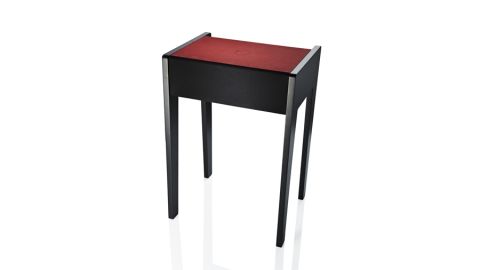 The La Boite Concept LD 100 is a sleek, minimalist, elegant desk with a kick-ass stereo speaker and amp built right in. It sounds fantastic, looks amazing and offers somewhere to park your iPad.

Rarely do we see a speaker system that truly defies convention, and it's rarer still when the result looks like the La Boite Concept LD 100 - a sleek, minimalist, elegant desk with a kick-ass stereo speaker and amp built right in.

The key here, we think, is that La Boite's French engineers seem to have some weird insider knowledge about how the rest of us non-audiophiles actually live. Rather than forcing you to compromise on either sound quality or convenience, La Boite's boffins have delivered both, all the while giving you somewhere handy to park your iPad (or laptop).

At the business end at the top of the table - which sits on suitably minimalist legs - is the flat top speaker and amp combo. For your £660 you get six drive units (two 50mm tweeters for high frequencies, two 130mm midrange drivers and two 80mm 'full range' drivers, allowing the music to play through it to scale the dizzy highs (20kHz) and belly-troubling lows (20Hz) you'd normally expect from a 'proper' hi-fi setup.

Driving the drivers is a two-channel class AB digital amplifier, capable of 50W per channel, as well as audiophile-quality Burr Brown digital to analogue converters (DACs), though these are only used when an audio source is connected over USB - so they're for computers mostly, but you can use Apple's Camera Connection Kit to plug in an iPad.

What you unfortunately won't find on the La Boite Concept LD 100 is a proper dock for your iOS gear, or any kind of Wi-Fi or AirPlay facility. Instead, you'll have to use the aforementioned USB port, or the much easier option of connecting your device's headphone socket to the twin RCA ports on the LD 100 - a cable is provided for this, although you'll get better sound if you stump up for quality third-party cable.

Sitting next to the audio inputs are a combined source and volume dial, the USB port and those two 'full-range' 80mm drivers, which fire up and out from the back of the unit to give a stab at stereo sound. You also get a black silicon mat (you can buy other colours, as seen here) for the top of the unit, to rest your iOS device on while reducing unwanted vibrations.

Since there are no real setup shenanigans, it's easy to get the La Boite LD 100 up and running right away, and it's here that it proves its mettle. For one, it feels like a proper grown-up sound system, not a pathetic excuse for one, like most all-in-one speakers; and secondly, it rewards you with a breathtakingly beautiful presentation that will please just about anyone that hears it.

The La Boite can even serve up chunky slabs of well-shaped bass when required - something most other speaker docks struggle to provide.

The only minor quibbles are that the Concept LD 100 can be unforgiving of poorly recorded sources - even when listening to higher bitrate songs from iTunes - and also can't quite conjure up a true stereo soundstage.